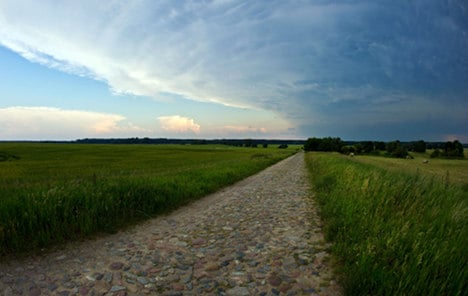 “The heat wave will leave as quickly as it arrived,” said DWD meteorologist Marcus Meyer, adding that, “a cold front will be back to pester us” by Thursday.

Tuesday afternoon will see people across the whole country basking in temperatures way over 30C. In the north it could be a little cloudy but everywhere else will see pure blue skies. In the south and south west, it could even reach 38C. Along the coast it will, as is normal, be slightly cooler with highs of 25C.

As night falls, hillier parts of the country could hear the odd roll of thunder, but this should pass as the small hours arrive. The north will stay slightly cloudy and some places, might get some light rain. Lows of between 21C and 16C should make for a balmy night.

Wednesday will be sunny everywhere in the morning but towards the afternoon central and western regions could see some clouds building. This will, for those regions, signal the end of the current hot snap as they will bring heavy rain and even the odd hailstorm. Yet highs could match the previous day at between 30C and 38C – even in rainy places.

Storms will rumble into Wednesday night, spreading into parts of the north and south from central states. In the far south and east it should stay clear and everywhere should see lows between 17C and 22C. Only around the Alps will it be a little cooler.

Thursday will be lively despite a calm start. The north west will be hit by the storms first, before they spread to the middle of the country. Strong winds, hail, very heavy rain should all be expected – except in the east and in Bavaria. Temperatures will stay warm, between 30C and 37C, except in the west where it will be more around 27C.

During Thursday night storms will spread all the way east, pushing temperatures down to as low as 12C in more rural areas.

Friday will be cloudy almost everywhere except for the furthest eastern areas. The whole country should prepare for a showery day and in the north these could develop into thunderstorms. Highs will drop to between 20C and 29C, signalling the end of the heat wave.