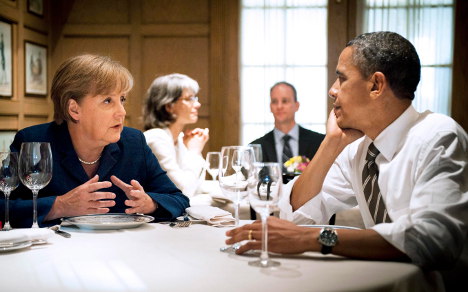 Merkel confirmed in an interview with commercial broadcaster RTL that she would discuss with Obama an issue which has caused deep unease in Germany, where memories of the East German Stasi’s spying on citizens are still raw.

“I will call for more transparency,” said Merkel, who grew up in the communist East.

She spoke on Monday, ahead of that day’s G8 summit opening in Northern Ireland and talks with Obama in Berlin on Wednesday.

She said Germans wanted to know if their online data was being sniffed out by the US National Security Agency (NSA).

“We have to be clear — what is being used, what is not being used,” she said.

Merkel said that she was “certainly surprised” by the reports about the so-called PRISM programme, while noting that she recognised that secret services needed to address the threat of terrorism with 21st century surveillance techniques.

“However it must be proportional,” she said.

The White House on Friday sought to cool German fears over its secret Internet surveillance programme, saying Obama would tell Merkel it was purely aimed at thwarting terror attacks.

But Ben Rhodes, a US deputy national security advisor, pointedly noted that Germany had served as a staging ground for some of the hijackers who plotted the September 11th 2001 attacks.

Under the PRISM programme that came to global attention this month, the NSA can issue directives to internet firms such as Google and Facebook to gain access to emails, online chats, pictures, files and videos uploaded by foreign users.

The European Union has expressed disquiet over the scheme and warned of “grave adverse consequences” to the rights of European citizens.

Meanwhile Der Spiegel magazine reported that the country’s foreign intelligence service (BND) planned to spend €100 million over the next five years to expand its web surveillance, with up to 100 new staff members.

Der Spiegel said the BND aimed to monitor international data traffic “as closely as possible”, noting that it currently kept tabs on about five percent of emails, internet calls and online chats while German law allowed up to 20 percent.

Unlike the NSA, Germany’s BND is not allowed to store the data but must filter it immediately.

A government spokesman said on Monday that the plans were only in the “realm of deliberations” and that just €5 million had been formally earmarked for beefing up surveillance activities, which “had no relation to PRISM”.

The spokesman, Georg Streiter, told a regular government briefing that Germany was investing in means to fight “cyber attacks” against “servers… and networks that could compromise our security”.

He declined to provide further details.