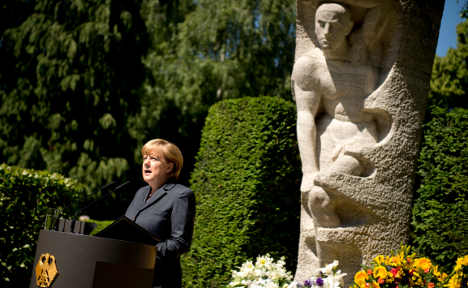 The demonstrations on June 17 1953 had grown from a strike by East Berlin builders against increased work quotas. Unrest spread quickly across the country. More than a million people took to the streets in cities across East Germany.

The government enlisted the help of the Soviet Army to quash the demonstrations. Tanks rolled in to overpower protesters, many of whom continued fighting into the night. There were major clashes in central Berlin. Scores of demonstrators were killed, though the exact number of deaths has never been ascertained. Many more were imprisoned later.

While the protest was sparked by a call for better working conditions, it initiated a wider movement demanding democratic reforms and civil liberties.

Speaking at a ceremony at the Seestraße cemetery to mark the sixtieth anniversary of the event, Merkel said “We bow to the moral courage of those who also fight worldwide for freedom and human dignity, for democracy and the rule of law, for the protection of universal human rights, and risk much, sometimes everything, for it.”

She also stressed the historical link between the protests and the ultimate fall of the Berlin Wall in 1989. The protest would, she said, “remain unforgotten as a significant milestone of German history”.