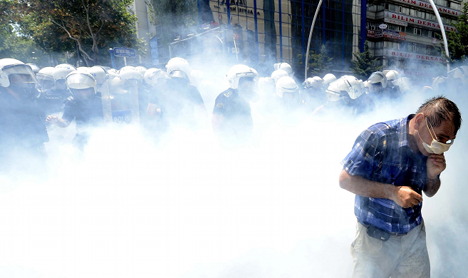 “There were horrible images in which one could see that the approach was much too harsh in my view,” Merkel told commercial broadcaster RTL in reaction to news coverage of riot police breaking up demonstrations in Istanbul and the capital Ankara.

“What is happening in Turkey at the moment does not meet with our ideas of freedom of assembly, (or) freedom of expression,” she said. “I am in any case shocked.”

Merkel called on the Turkish government to respect basic democratic liberties. “That is part of a developed society,” she said, adding that she hoped opponents of Prime Minister Recep Tayyip Erdogan would “find their place in a Turkey that is moving into the 21st century.”

She urged a peaceful dialogue between the two sides but dodged a question as to whether Turkey’s negotiations on becoming a member of the European Union one day should be affected by the authorities’ reaction to protests.

On Friday a German foreign ministry spokesman insisted that Ankara’s response to the demonstrations had no direct bearing on its bid to join the European Union.

But earlier last week a source close to the ministry had said that there was now greater scepticism on moving forward with accession talks with Turkey.

Two of Turkey’s main trade unions began a nationwide strike Monday to protest at police violence against anti-government demonstrators, a day after Erdogan defended his crackdown on an Istanbul protest park.

Riot police were still firing volleys of tear gas and water at pockets of demonstrators in Istanbul and Ankara early on Monday, after a weekend of clashes sparked by the eviction of protesters occupying Gezi Park, the epicentre of the protest movement.