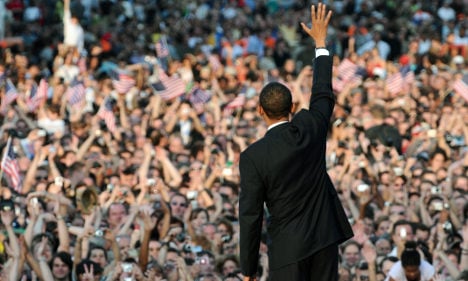 The US president will make his first state visit to Germany, albeit his third trip to the country, when he arrives late on Tuesday for a 24-hour stay.

Candidate Obama dazzled a crowd of 200,000 people in an open air speech in 2008 some months before his historical election. He will face a more modest reception this time around as talks center on trade and secret surveillance practices, observers say.

President Obama appears ready to try to harness some of the alliance’s bygone sparkle by timing his visit one week ahead of the 50th anniversary of Kennedy’s speech.

He will use Berlin’s most historical backdrop – the Brandenburg Gate – to deliver a speech on Wednesday about the countries’ “enduring bonds”.

But the agenda for the talks, on the heels of a G8 summit in Northern Ireland, looks less than visionary, with slow progress on a EU-US trade pact to figure prominently.

Germany, however, is longing for reassurance that Europe still matters to the US since Obama’s much-heralded pivot to Asia.

“Kennedy’s visit to Berlin was an almost ecstatic celebration of a protective alliance,” it wrote. But it said nearly 70 years after World War II and two decades after the end of European communism, “the trip of (JFK’s) no-less-charismatic successor will likely be a prosaic family gathering.”

The US has slashed troop levels in Germany to 73,000 from nearly 200,000 in the early 1990s and China has surged past Europe’s top economy as a market for US goods.

Commentators note that Germans, like other ardent Obama supporters, are frustrated by impasses on slowing climate change and closing Guantanamo Bay prison.

But now revelations of a global Internet snooping operation run by the National Security Agency have shocked a country where memories of systematic spying on citizens by communist East Germany’s despised Stasi are still raw.

Merkel’s spokesman said Monday the issue was sure to arise and Justice Minister Sabine Leutheusser-Schnarrenberger demanded a full explanation.

“All facts must be put on the table,” she said in an online editorial.

They will also hash out sticking points on the stalled trade deal between the US and the EU, the world’s largest economic relationship. Merkel backs the accord but says it must address German concerns about US genetically modified crops.

On the positive economic side, transatlantic tensions over US calls for Germany to boost stimulus spending have eased, as the eurozone debt turmoil has calmed.

The slaughter in Syria and the troop drawdown in Afghanistan will also dominate discussions.

As for Merkel and Obama’s personal relationship, they appear to have come to respect and trust each other more over time with the chancellor receiving the rare honour of a White House state dinner in 2011 and the Presidential Medal of Freedom.

“(In 2008), Obama exhibited a fluency that bordered on the glib which has never been the chancellor’s thing. She’s not fluent and certainly never glib,” Constanze Stelzenmueller of the German Marshall Fund of the United States told AFP.