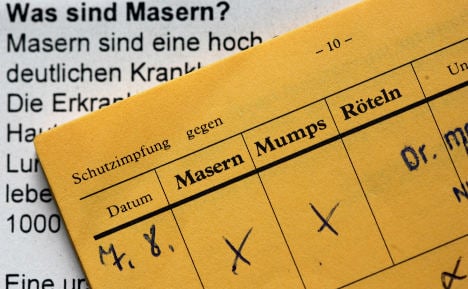 Michael, a teenager from Lage in the German state of North Rhine-Westphalia, contracted measles at the age of five months in the waiting room of a doctor’s office, according to the German Paediatricians’ Association. He developed an incurable measles brain inflammation at the age of nine, but he only passed away a few days ago.

His is the second death traced back to six infections from the same waiting room. Natalie, a 13-year-old girl, died in 2011 after becoming infected in the same place.

“There was another boy there at the time with unclear symptoms whose parents had refused to have him immunized against measles,” said Martin Terhardt from the association, adding he ended up infecting six other children including three infants.

“If that boy had been vaccinated, Natalie and Michael would still be alive today,” he said.

Terhardt, who is member of Germany’s official vaccination commission, said the late brain inflammation was “a time bomb” for children infected with measles while still too young to have been immunized.

The doctors association pointed to a recent measles outbreak in Berlin, as why parents need to have their children vaccinated. More than 300 cases of measles have been diagnosed in the German capital since the start of the year – the most ever recorded.

On average, two people die each year in Germany from measles complications.