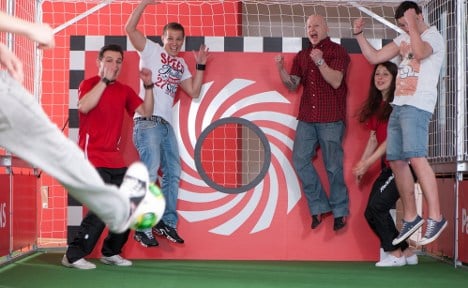 Last week he went to his local Media Markt shop to buy a load of prizes for a tombola draw. He paid for the flat screen television, a loud speaker system, a coffee machine, a deep fat fryer and a kettle, and was leaving the shop.

Because he had bought them separately and thus had five receipts, he was invited to take five shots at the goal shooting competition – a wall with a hole cut into it. He shot three goals, and received €230 refund on three pieces of his shopping.

Rather than going home, Ward went straight back into the electronics shop and spent the money on iPod accessories, two Blue-ray discs and a navigation system – and came back with the receipts to give the goal wall another four shots.

This time he scored twice and got €160 back.

A woman who saw his success and who had just bought eight small computers for work – for €2,400 – asked Ward if he would take her shot for her – and he agreed, and scored, securing the money for the woman.

“Everyone was cheering, it was crazy,” he told the Aachener Zeitung. And he stressed she had not paid him to do it. “All I got from the woman was a hug,” he said.

The following day – the last of the nationwide competition – Ward returned with a few friends to the shop, and they bought up a load of goods. But as they tried to have a go at the prize football wall, Media Markt employees stopped them from taking part.

“The impression arose that the customer was not shopping for normal amounts – rather that he was acting commercially – which was not allowed. It also appeared that the footballer wanted to play for other customers, perhaps in order to share the winnings,” said Eva Simmelbauer, spokeswoman for the chain.

Ward told the newspaper he felt the company had acted outrageously by banning him from the competition.