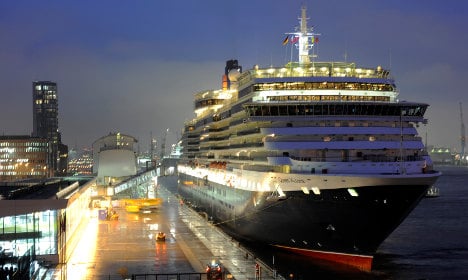 He is said to have flung the insults at officials while serving time in a Bavarian prison. After serving his sentence he returned to the USA but failed to keep in touch with the authorities despite knowing the investigation into the insults was active.

A decision to take a cruise around the Baltic Sea proved his downfall – as soon as the ship docked in Germany, police moved in and arrested him.

The 53-year-old man served a jail sentence in Bavaria for several fraud-related offences, Erika Krause-Schöne, spokeswoman for the Federal Police in Rostock told The Local.

She said the man was said to have hurled the insults at prison officers during his time in Augsburg prison. The investigation into the insults was continued after his release – when he returned to the USA.

When a foreigner is involved in an ongoing criminal investigation he or she is supposed to nominate a lawyer or other representative to maintain contact with the German authorities on their behalf.

It would appear that the 53-year-old American failed to do this – meaning that in effect he was a fugitive from justice, she said.

The man was arrested on Tuesday while aboard the Queen Victoria cruise ship when it docked in Rostock. “The cruise ship had come from Lithuania on a Baltic Sea tour, and he was a passenger. We check the passenger lists as the American authorities do, and found that there was an arrest warrant for him, so we arrested him.

“He is in investigative custody here in Rostock and will be transferred to Bavaria.”