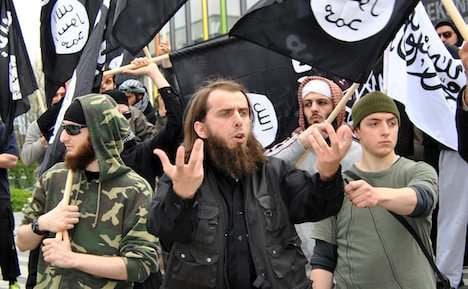 “Salafism is a particularly rapidly growing and extremely worrying group within the extremist Islamist movement,” Hans-Georg Maassen, head of domestic

intelligence, told a news conference as he presented his agency’s 2012 annual report on Tuesday.

Radical Islamists in Germany numbered 42,550 in 2012, according to surveillance services, and the number of Salafists, who espouse an austere form of Sunni Islam, within the movement grew to 4,500 from 3,800 in a year, he said.

Maassen added that while not all Salafists are jihadists, it was clear that those who departed Germany for Syria or Egypt were there for that purpose.

“One can say that Salafism is an essential step towards jihadism or for people ready to conduct terrorist attacks,” Maassen said.

He also stressed that the number of extremist Islamists in Germany did not signify there were “42,500 potential terrorists” in the country.

Still, some 1,000 people including some Salafists are considered dangerous and 130 are seen as a particular threat and are monitored around-the-clock.

The intelligence report also showed that Egypt had replaced the Waziristan region of Pakistan as the main centre for the training of jihadists.

Syria is also a favoured destination. “We counted more than 60 people who left Germany to fight in Syria,” Maassen said.

In March Germany banned three Islamist Salafist groups which officials said aimed to sweep aside democracy and set up a system based on Sharia Islamic law.

Additionally German Interior Minister Hans-Peter Friedrich said a “significant” number of people belonging to the Lebanese Shiite movement Hezbollah were living in Germany but that they behaved in a “relatively moderate way”.

“We are doing everything to make life for them as difficult as possible,” Maassen added, saying Germany was cooperating with Israel on the issue of Hezbollah, blacklisted as a terrorist organisation by Washington.

The EU is facing calls to also add Hezbollah’s military wing to its list of “terrorist” groups.

Turning to Germany’s extreme right, racist attacks increased last year despite a slight fall in the number of supporters of the far-right movement, the domestic intelligence service report said.

“There is a slight decrease in the number of members of the extreme right movement but the number of people ready to use violence is very striking, at 43 percent,” Friedrich told reporters.

Some 802 racially-motivated violent crimes were registered last year, in the first increase in four years.

About 22,150 people were considered as being part of the far-right movement in Germany in 2012, slightly down on the figure for the year before but a far cry from the 50,900 members of 2000.

But Maassen said about 10,000 members were considered to be inclined towards the use of violence.

And he underscored that the racially-motivated crimes blamed on the neo-Nazi trio, the National Socialist Underground, whose last living member Beate Zschäpe is currently on trial in Munich, “are rejected overall by the extreme right movement”.

But he added: “There remains a small fringe within the extreme right which finds it good and which sees terrorism as a possible form of action.”

Zschäpe denies the charge of complicity in the murders of eight ethnic Turks, a Greek immigrant and a German policewoman between 2000 and 2007 as a founding member of the NSU.

The random discovery of the NSU in late 2011 embarrassed authorities, exposing deep security flaws and raising uncomfortable questions about how the cell went undetected for 13 years in a country proud of owning up to its Nazi past.