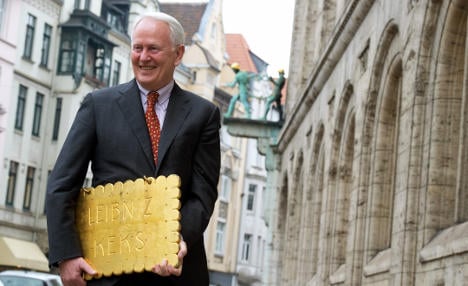 The audacious theft of the famous golden Leibniz biscuit back in January this year by a mysterious group of cookie monster extortionists rocked Germany and made international headlines – yet owners Bahlsen will not be using the story as a gimmick to sell biscuits, said chairman Werner Bahlsen.

Police were at a loss when the giant 20-kilo biscuit, which had hung outside the Bahlsen headquarters in Hannover since 1913, suddenly disappeared at the end of January. Desperate for its return, Bahlsen put up a €1,000 reward for information leading to its recovery, but instead received only a ransom note from the thieves.

Only when the biscuit-maker announced it was ready to donate 1,000 Leibniz cookies to 52 social institutions was the emblem returned – appearing one day wrapped up in a red ribbon on a horse monument in front of Hannover University.

The four unrepentant thieves later appeared on television to claim responsibility for the stunt, but police are now no closer to finding their true identities.

“Our marketing team had lots of ideas of what to do [based on what happened], but I put a stop to them,” Bahlsen, 64, told the paper on Monday.

Once recovered, the precious biscuit was put in a museum for restoration and safe-keeping, but is set to return to its rightful place in July – this time under the watchful eye of a CCTV camera, said Bahlsen.

The chairman again denied any speculation that the entire affair had been an inside job staged as a publicity stunt, but admitted that it had been a good year for his company.

“We’ve seen a small amount of growth,” he said.