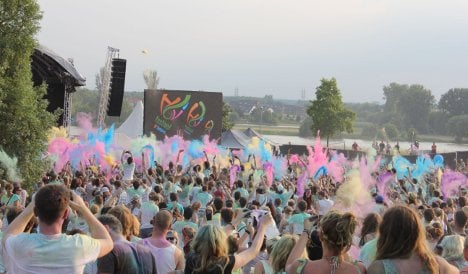 It was a beautiful summer day in Leverkusen near Cologne on Saturday. The Neuland Park located on the banks of the Rhine River was packed with hundreds of people swaying to electronic music fused with Indian beats. A total 9,000 people visited the festival and had the chance to experience a slice of India’s exotic magic. That is just what the organizers were aiming at said Maxim Derenko. His colleague Jasper Hellman travelled to India in 2011 and was completely smitten by the Holi festivities in Delhi.

As per the Hindu calendar, the festival of Holi is celebrated on the last full moon in February or March, to mark the arrival of the spring season. People smear each other with colours and share sweetmeats. The festival denotes joy and happiness and on this particular occasion all caste barriers are let down. This spirit of togetherness inspired Hellman to transport the festival back to Germany. In Berlin, Hellman got together with Derenko and Max Riedel and launched their first Holi event in Berlin. The event was sold out immediately and the trio set out to color cities across Germany, Austria and Switzerland.

The event in Leverkusen kicked off at noon with techno music followed by drummers in ethnic costumes. Meike, a 23-year-old student said she loved the music at the festival. “I am not a Bollywood fan, but I like the way they have mixed Indian elements to the music,” she said. “Also, the atmosphere here is so peaceful, guess that the karma is just right here!”

Casually dressed mostly in white, visitors flocked the huge stage with live performances. However, there was also the option to lay back and chill near smaller stage with a DJ keeping one entertained. Food stalls offered a variety of cuisine: crepes, sausages, and not-so-spicy chicken curry. There was a special stall set up for ladies, where they could accessorize themselves with a free Bindi (a popular forehead decoration in India, a red bindi symbolizes that the woman wearing it is married).

The colour packets could be bought for €2 each at the festival. Visitors were not allowed to bring their own colours as the organizers wanted to make sure that the substances used were harmless.

The party was at its peak around 3.30pm when the first round of colours went up in the air. The colour throwing and smearing was repeated every hour and the last one was at 9.30pm shortly before the festival came to an end.

Karin(54) mother of two let herself be persuaded by her daughter to go the festival. “It’s fascinating! The music is great and it’s sunny. Even though I don’t know anything about India, I love the concept, there is something for all age groups and I would definitely visit the festival again!”

The festival collaborated with Incredible India, Indian Tourism Office in Frankfurt to expand the spirit of Holi in Germany. Many visitors were however unaware of the festival’s real significance. And for others, the India-fans, the festival left a bitter taste of commercialization behind.

Sven (41) has a special place for India in his heart. On a vacation in Goa he met his wife and also had the chance to celebrate the festival in India. “This is just a Techno music festival where people throw colour at each other. There is nothing Indian about this festival, not even stands selling authentic Indian food or souvenirs.”

The fans hoped that the organizers would add a few more elements of authentic India to the festival in the future.