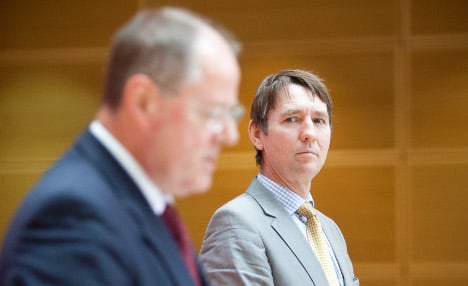 Steinbrück of the main opposition Social Democrats (SPD), said he had sacked his main spokesman Michael Donnermeyer “to go into the last 100 days of the campaign with the best possible team”. A former Berlin bureau chief of Germany’s top-selling daily Bild, Rolf Kleine, will replace Donnermeyer.

The SPD has been trailing Merkel’s conservative Christian Democrats (CDU) by a double-digit margin for several months. A poll late last week had the party at 27 percent versus 41 percent for the CDU.

Steinbrück, who served as Merkel’s finance minister in a 2005-2009 “grand coalition” government, has failed to hit his stride in the campaign.

He ran into controversy late last year when the SPD candidate, meant to be the hope of blue-collar Germany, was revealed to have accepted high speaking fees worth more than one million euros ($1.3 million) in total over a three-year period.

Then he blundered by saying the chancellor’s salary was too low in an interview whose quotations Donnermeyer authorised, and ruffled feathers abroad when he labelled Italy’s former premier Silvio Berlusconi and comic-turned-politician Beppe Grillo as two “clowns”.

More fundamentally, Steinbrück has struggled to set himself apart from Merkel, Germany’s most popular politician, as she has occupied the centre ground.

Frustrated Social Democrats have accused her of poaching their issues as she has called recently for caps on rent increases and for more generous benefits for families with children and pensions for stay-at-home mothers.

On the eurozone crisis, which Merkel has said will be a decisive issue in the race, Steinbrück has proved reluctant to attack the chancellor’s hardline stance on fiscal discipline in debt-mired countries.

That position has won widespread approval in Germany, which is the paymaster for Europe’s bailout packages. Steinbrück has suggested a slight recalibration toward more economic stimulus to kickstart ailing eurozone economies.

The suspenseful question of the election appears to be whether Merkel will manage to hold on to its current junior coalition partner, the pro-business Free Democrats (FDP), which could slip below the five-percent mark required for seats in parliament.

If so, the SPD could again become Merkel’s coalition partner, or try to cobble together its own ruling majority with the Greens. That alliance, however, is still short of the support necessary to take power according to opinion polls.