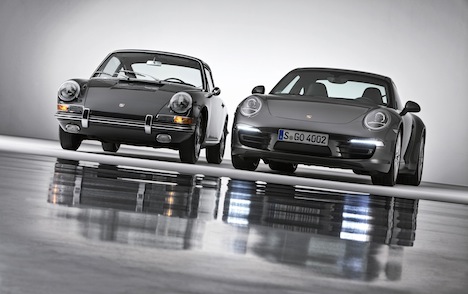 “Look daddy, it’s a Porsche,” my daughter yelled from the backseat one day last summer as we rolled down the autobahn.

It’s a familiar enough expression, and we all dutifully looked out the window to admire the iconic, rear-engine car roll past. What surprised me, however, was that the information came from my six-year-old daughter, who is oblivious to other car brands.

Many may be surprised to learn that the German beauty, the Porsche 911, is turning 50 this year, giving children and adults alike the chance to celebrate the car’s enduring appeal.

Stuttgart’s Porsche Museum is throwing a summer-long birthday party with a new exhibition entitled “50 Years of the Porsche 911.” Everyone is invited to join in the party, and 911 owners and those born in 1963 get in free.

The anniversary exhibition, the biggest new addition to the museum since its opening in 2009, promises to draw crowds of 911 fans from across the globe.

Housed in an elegantly designed building in Stuttgart-Zuffenhausen, the museum provides informative displays detailing Porsche’s past and present, with at least 80 exhibits on display. The must-sees include the world-famous 356, the 911, 550 and 917, as well as technical displays highlighting the innovative know-how of founder Professor Ferdinand Porsche from the early 1900s.

Prof. Porsche designed the first production-line hybrid car with an electric engine, for example, debuting it to much acclaim at the Paris World Fair in 1900. This marked the first historical instance of Porsche proving to be ahead of its time, launching the brand’s long legacy in innovative motoring.

Other museum highlights include several rally cars, films about the production process, sound chambers where you can feel and hear the power of the Porsche engines, engine displays, and a restaurant with seated viewing of a workshop where visitors can watch expert mechanics fine tune various models.

For the anniversary exhibition, visitors get the added treats of seeing a variety of never- before-displayed automobiles and exhibits. To mark the birthday, Porsche engineers have created a stunning replica of the very first 911 (then called the 901) to be shown at the International Motor Show in Frankfurt in 1963. They will also learn how Ferry Porsche’s son came up with the famous design – to meet the demands for a 2+2 seat, rear-engine sports car that could carry a golf bag in the boot – which has helped cement the brand in motoring history.

In all, the 911 anniversary exhibition gives visitors a chance to see more than 40 different 911 versions, including limited edition models, race cars and even prototypes. Mostly, however, it’s a chance to celebrate the classic style and appeal of the 911, which speaks to children and adults alike.

Unlike other exclusive sports cars, the Porsche 911 draws admirers from all walks of life and every social scale. “For most people, it’s the dream car,” said Astrid Böttinger from the museum’s press office.

The cars on display offer a visual history of the 911’s evolution, from its early heyday through its redesigns and innovative changes. The models enable visitors to see the subtle yet technically impressive changes up close, including the innovative Targa roll bar introduced in 1965, the bellows-style bumpers of the 1970s, the 911 Turbo with rear spoiler, first introduced in 1974, up through to the ultra-streamlined models of the 2000s and today.

One wall has been dedicated to the silhouettes of all of the varieties of 911 ever produced, from 1963 forward, and what strikes the eye is how little the design has changed, despite seven generations and various overhauls.

Porsche’s engineers strive, said Böttinger, to retain the integrity of the beloved design. “They can’t touch the basics,” she explained, “because our customers are purists. They’re passionate about the 911’s design.” In other words, fans love the look of the 911 – they always have and always will.

The low-slung bonnet and gentle curves – which have always enabled the Porsche 911 to look both classic and modern at the same time – make the car recognizable from any angle. This is why even my American daughter, age six, can knowingly and admiringly spot a Porsche.

The fact that the 911 is loved by young and old alike bodes well for the brand’s next 50 years as well. “Perhaps, one day the 911 will fly,” Böttinger said.

The final museum exhibit is of a breathtaking 50th edition model, a 911 Coupé capable of 300 kliometres per hour. Only 1,963 of these cars will be made.

For those wanting to leave their own mark on Porsche’s history, a creativity wall has been set up at the end of the tour where visitors can draw their own version of a the Porsche 911 silhouette.

The Porsche Museum is open from Tuesday through Sunday, 9am to 6pm. For non-911 owners and those born in any year other than 1963, the entry fee is €8. The 911 exhibition runs through this September. The museum is located at 1 Porscheplatz, Stuttgart-Zuffemhausen, 70435.