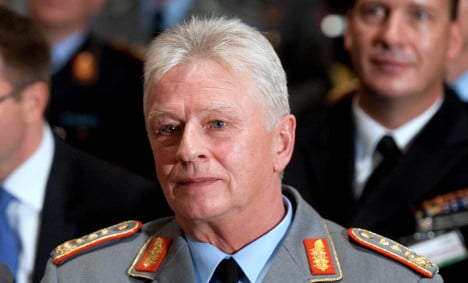 “Of course mistakes were made in the acquisition process,” Wieker said in an interview with Der Spiegel published Sunday. “And of course I, along with others, should have pointed out the poor developments earlier. I have to accept that blame.”

He also admitted that it was possible that de Maizière could sack him. “I carry – together with others – a lot of responsibility for the Euro Hawk project,” said Wieker. “And if the minister is now talking about there being consequences for personnel, then of course I belong to the circle of those that could be meant by that.”

“I am a soldier, and I bear it with composure,” he added. “We are not irreplaceable.”

De Maizière has been under immense pressure in the past few weeks over how much, and what point, he knew that the Euro Hawk drone project was destined to fail to meet legal and technical standards.

The Euro Hawk – a US-built prestige project for the German army and NATO – was cancelled last month after several years of development and close to half a billion euros of investment.

De Maizière admitted to Focus magazine, “I certainly heard of the problems,” as the drone programme had been discussed, but he added that “conversations in corridors” were no substitute for official information. “The order of business of any ministry certainly does not take place in the hallway,” he said. De Maizière claims that his intervention prevented even more money being invested in the programme.

But according to the magazine, de Maizière claimed at a parliamentary budget hearing last Wednesday that he had not been informed of the problems with the drone, even informally, until May 13th this year.

“I think he is lying,” Green party MP Tobias Lindner told the magazine.