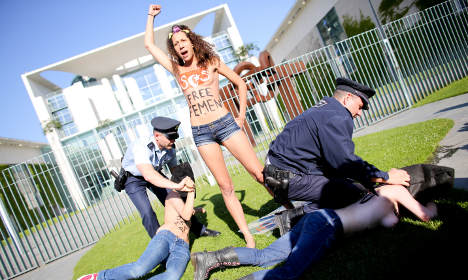 The three bare-breasted protesters chanted “Merkel free Femen” and two of the women had the first names of women on trial in Tunis for a protest last month in support of a detained Tunisian activist scrawled in black ink across their torsos.

Two of the demonstrators outside the Chancellery in central Berlin wore a black hood over her head. Officers dragged the women away from the iron security fence surrounding the building.

Click here for pictures of the protest – WARNING: NUDITY

Merkel was to meet Tunisian leader Ali Larayedh later Friday for talks on the democratic transition in the birthplace of the Arab Spring, human rights and the potential for German investment. Their working lunch will be followed by a joint press conference.

At an industrial fair in the northern German city of Hannover in April, Femen activists disrupted a tour by Merkel with visiting Vladimir Putin and shouted obscenities at the Russian president.

A Tunisian court on Wednesday adjourned the trial of three European Femen activists, ordering that they remain in detention.

The activists, two Frenchwomen and one German, risk six months in prison for baring their breasts outside the main courthouse in Tunis on May 29, in solidarity with a Tunisian activist with the same “sextremist” group who had been arrested 10 days earlier.