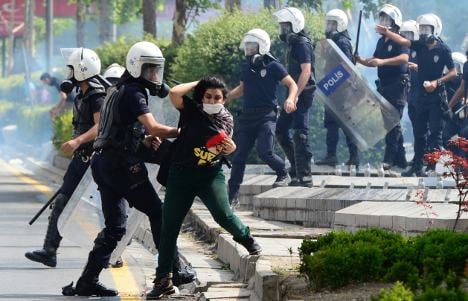 “I expect the Turkish government to respond to the essentially peaceful demonstrations appropriately and without the use of force,” federal commissioner Markus Löning said in a statement.

“The large number of those arrested and injured is shocking,” he said. Three people have been killed, including a policeman, and Turkey’s national doctors’ union said more than 4,300 have been injured in recent days.

About three million Turks or Germans of Turkish origin live in Germany, making up the country’s largest ethnic minority.

The rallies since May 31 accuse Prime Minister Recep Tayyip Erdogan of increasingly authoritarian rule and seeking to force conservative Islamic values on Turkey, a mainly Muslim but staunchly secular nation.

Löning called on the Erdogan government “to prevent excessive use of force, to refrain from the continuing action against people who exercise their fundamental rights to freedom of expression and assembly, and to release the detainees immediately”.

“The detention of demonstrators who exchange information on Twitter is also unacceptable and constitutes a restriction on freedom of expression in Turkey. They too must be released immediately.”