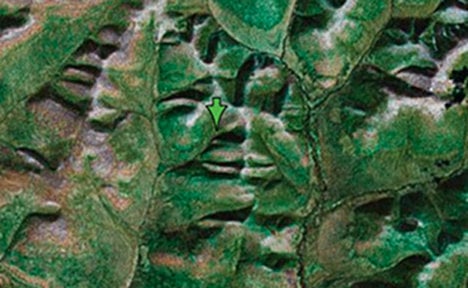 “One of human’s most characteristic features is the desire to detect patterns” says the website of creators Onformative. This tendency, to see meaning where it might not be, is what the team wanted to tap into by making a search tool to find all the earth’s hidden faces.

Some of the faces found so far

So far, the programme has uncovered a 200-metre-wide grimacing face made of rivers in China, a pair of kissing hills in Russia, amongst many others, Der Spiegel news magazine reported.

Developed using facial recognition technology, computers running Projekt Google Faces are struggling to grasp what a human face actually looks like. When staff come to look at the pictures it selects, lots are discarded as nonsense.

Onformative developer Cedric Kiefer told the magazine that “our method means we’re left with a lot of left-over images,” adding that the best way of spotting something interesting remained doing so with the human eye.

There are apparently two obvious faces in the Versailles gardens in Paris that the searching programme missed.