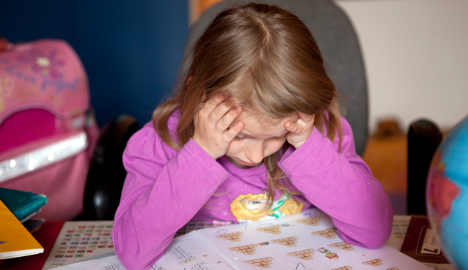 Researchers at the University of Bielefeld carried out face-to-face interviews with 900 children and gave their parents questionnaires. The “Violence 2013” study (Gewaltstudie 2013) focused on two age groups in particular – six to 11-year-olds and 12 to 16-year-olds.

Although Germany introduced a smacking ban in 2000, almost one third of children aged between six and 11 from less advantaged backgrounds reported being smacked regularly or often, while 22.7 percent from privileged families reported the same.

In the older age group, the difference was less pronounced. 17.9 percent of 12- to 16-year-olds from wealthier backgrounds said they had experienced violence, while 22.1 percent of youths from less privileged families reported the same.

Verbal abuse, which left children feeling that they were “stupid” and “worthless” was reported by 28 percent of children from middle-income, 30 percent from privileged and 22 percent from the poorest families.

However, in the older age group, youths from the most privileged backgrounds were most likely to be given the feeling they were worth less than others. Researchers put that down to a greater emphasis on achievements.

According to Professor Holger Ziegler, who led the study, schools are exacerbating rather than curbing the problem. 44.6 percent of children from disadvantaged families reported that teachers treated some pupils better than others. 22.6 of children from the most privileged backgrounds and a third of middle-class children reported the same experience.

Ziegler has divided the children he studied into four categories, which he has called “sheltered “extreme,” “silent victims,” and, most interestingly, “the badgerers.”

The first group makes up 55 percent of children, and applies to those who grow up without violence and are not violent themselves. The “extreme” cases experience serious violence, are violent themselves and are often involved in conflict with their peers and teachers.

However, he says those most at risk are the “silent victims,” who experience violence often but are not violent themselves and frequently report being unfairly treated by teachers.

The “badgerers” make up 16 percent of those surveyed, are predominantly male, come from privileged backgrounds, and self-report a good relationship with their parents, as well as high confidence. However they are themselves more violent than other children.

Such young people rarely face consequences for their behaviour, because they are not considered to be problem cases, like those in the “extreme” category, according to the study’s author.