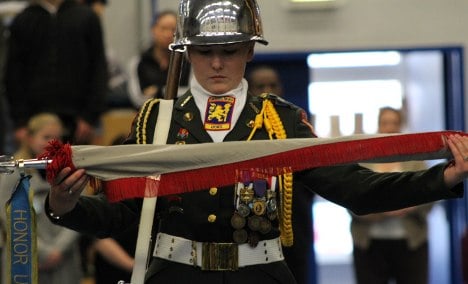 The volunteer wearing the lion costume demonstrated impressive endurance, as he sat for an hour and a half with a plastic crown on his head before a packed gymnasium still humid from the rain that had only just stopped falling outside.

But someone had to do it. The symbol of the Heidelberg High School and the mascot of its many sports teams is embedded deeply in the hearts of its graduates, something made clear by the effect principal Kevin Brewer’s repeated shouts of “We are Lions!” had upon the audience he addressed.

The closing of the school after nearly seven decades was the first in a series of sombrely celebratory events accompanying the closure of the US Army Europe (USAREUR) headquarters in Heidelberg.

Brewer, who will finish his career at a small school in England’s Yorkshire Dales where he started as a teacher 25 years ago, was emotional.

“When we close our doors the community will change. We’ve been ambassadors for America in Heidelberg for all these years. People will miss us. We’re better off having lived here and those whose lives we touched are better off as well,” he said.

A sendoff in style

Heidelberg is seeing the Americans off in style, bringing to an end a relationship which began in 1945 when US troops entered the city and occupied a Wehrmacht base, today known as Campbell Barracks, on its southern outskirts.

The US headquarters are set to relocate to nearby Wiesbaden, as part of a larger effort to cut the number of American military personnel in Europe from 62,000 to 24,000 by 2015.

USAREUR Command Chaplain David Moran, a former HDHS student in the 1970s who led those present in a prayer commemorating graduates who had died serving in Iraq, said he understood why Washington was consolidating US bases in Europe.

“It’s sad, I will really miss this school. But it makes more sense to have bases closer together, sharing in the mission with Nato as opposed to running things in post-war Germany. It’s a natural expectation,” he said.

“A time will come when many of them will miss us. Throughout the 68 years we’ve been here I think we’ve constantly effected positive change. There’s a rich and strong heritage in Heidelberg and US ties with the community are strong. It’s like having a cousin,” he said.

Many lives have indeed been touched by the American presence in Heidelberg, with the US Army having employed a large number of citizens from the local community.

Heidelberg Mayor Eckart Würzner said schemes are in place to assist former employees in finding work. Many are retiring while others have been relocated to bases in Wiesbaden and Kauserslautern.

The impact of the departure will be mainly economic, he said, with a drop in petrol and energy consumption among the effects expected.

“We predict a loss of about €50 million a year. We’re talking about 20,000 people leaving the region. Heidelberg is a growing and economically stable city so we can overcome this period, but it will of course affect us,” he told The Local.

When asked about his feelings on the departure, Würzner admitted he “really felt sad”.

“After World War II no-one in Heidelberg knew the way into the future. The US Army worked to educate the young generation about how democracy works. It gave Heidelberg a perspective and helped the city get back on its feet and on its way to democracy,” he said.

The opening of an exhibition documenting decades of US involvement on Saturday in Patrick Henry Village, a military complex in southeast Heidelberg, , was attended by many local residents who had either worked as US Army employees or have formed personal ties with members of the military.

The 33-year-old high school teacher Stefan Sell, who became involved in the US Army through an American religious group, believed the departure is being greeted by the community at large with “indifference”.

“Little will change, people will simply get on with their lives. Some former barracks will be freed up to create much-needed accommodation for students, which can only be a good thing. But ties will mainly be broken on a personal level, as some locals have formed friendships with the US soldiers,” he said.

Some controversy has surrounded the American presence in Germany, with anti-war demonstrations in the late 1960s and opposition to the use of German bases to support controversial involvement in Iraq indicative of growing anti-military sentiment across Europe. Several local parties have advocated US withdrawal in their campaigns.

Although some former army facilities will be returned to the city, most will be auctioned off by the state. Alongside a scientific exchange programme, Würzner revealed plans to open a “Peace Center” in Heidelberg to “keep the transatlantic cooperation and the historical democracy movement going.”

But the question for some is how Heidelberg manages to make up for what is seen by many as a loss in prestige.

“This is the biggest single troop withdrawal since the end of World War II. When you go into the Pentagon you see seven flags, and under one of these the word Heidelberg. It was the European Headquarters – that’s now being closed,” he said.