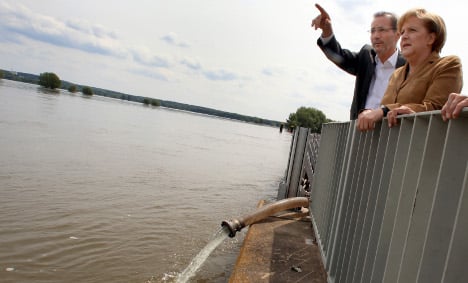 Merkel, visiting the flooded southern city of Passau, where three rivers meet, said the emergency cash would be disbursed in an unbureaucratic way because “what’s important now is that the aid quickly reaches the people.”

Some residents could be seen paddling canoes down flooded streets in the city where drinking water, power and phone services were cut.

Across the region, the official death toll rose to 11 as Czech emergency services recovered the body of a man from the swollen Male Labe river in the northern Krkonose mountain range, near the border with Poland.

The deluge had already killed seven others in the Czech Republic, including a woman who was hit by an uprooted tree as she walked her dog. Two others died in Austria and one in Switzerland.

Across much of the swamped region, rail, road and river traffic links were cut, schools and factories closed and hospitals evacuated.

In Prague, the flood water hit its highest level on Tuesday after inundating the city centre, displacing more than 8,000 people and forcing the night-time evacuation of the city’s zoo.

“It’s peaking in Prague right now,” said Petr Dvorak, spokesman for the Czech Hydrometeorogical Institute, adding that by evening the high waters would be 30 kilometres (20 miles) from the border with Germany.

Germany, already hit by its worst floods in decades in southern and eastern regions, braced for worse to come as masses of river water approached down the Vltava which merges with the Elbe River.

The German defence forces said they had deployed 4,000 troops for disaster relief in four states, securing dykes with sandbags, providing food, shelter and clothes for displaced people and monitoring water-logged areas from helicopters.

Merkel took a helicopter tour of flood-hit areas in the southern state of Bavaria, then visited Passau, where she said the floods appeared worse than those of 2002.

“The damage and the loss of income is a long-term matter. And that’s why our support will not cease,” said the chancellor, who faces an election in four months.

On a later stop in the Elbe city of Pirna, where waters were still rising, she said: “We will stand by the side of the people who are suffering.”

Other towns and districts in the states of Bavaria, Thuringia and Saxony have also raised the alarm.

In Magdeburg on the Elbe, city authorities declared a state of emergency and said they expected the river, normally at two metres, to rise to almost seven metres – higher than in 2002.

More than 30,000 sandbags were being filled to strengthen the city’s flood defences.

Several events were cancelled, including a music festival dedicated to Baroque composer Georg Friedrich Händel planned for June 6th -16th in and around the eastern city of Halle.

In Austria, the Danube was also expected to reach its highest point on Tuesday. More than 20,000 firefighters, police and rescue workers and 800 soldiers were mobilised.

In Hungary, Prime Minister Viktor Orban declared a state of emergency in some areas along the Danube, which was expected to peak Wednesday in western areas and hit Budapest by the weekend.

The government had mobilised 8,000 soldiers, 8,000 emergency personnel, 1,400 water management experts and 3,600 police officers, he said at a press conference.