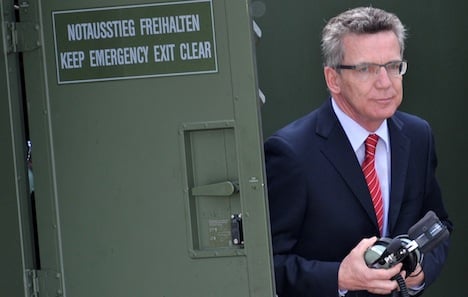 De Maiziere, is a close confidant of Chancellor Angela Merkel’s from her conservative Christian Democratic Union and had often been mentioned as a possible successor to the 58-year-old leader.

But with less than four months to go until a September general election, De Maiziere, 59, has become entangled in allegations he mismanaged a now-scrapped unmanned surveillance aircraft project with costly consequences.

The Euro Hawk programme had already swallowed more than €500 million ($651 million) before the defence ministry said on May 14 it would pull the plug.

Officials feared aviation authorities would not certify the Euro Hawk — a version of US-based Northrop Grumman’s Global Hawk customised by Europe’s EADS — because it lacks an anti-collision system. The ministry deemed the cost of adding such a system prohibitive.

De Maiziere, who has been attacked for failing to act far earlier, is due on Wednesday to present a report to parliament’s defence committee on what the media have dubbed the “drone debacle”.

He has been at Merkel’s side since she took power in 2005, serving during her first term as her chief of staff before taking over the defence brief after her re-election in 2009.

Long viewed as a safe pair of hands with a particular talent for organisation and administration, De Maiziere had figured on the short list of possible candidates to eventually take over the reins from Merkel. Commentators said that speculation now looked to be quashed.

“De Maiziere could have become chancellor one day but since the drones crisis, no one is talking about that possibility anymore,” the centre-left daily Süddeutsche Zeitung wrote Monday.

“The question is simply how de Maiziere will handle his mistakes and whether he can keep his job.”

The wasted funds come at a time in which Merkel has been preaching fiscal discipline throughout the eurozone as a means to check the spiralling debt crisis.

De Maiziere will face deputies just days after news weekly Der Spiegel reported that senior defence ministry officials were aware as early as February 2012 about the concerns that led to the programme’s cancellation last month.

Opposition leaders, who have been struggling to score points during the election campaign against the popular Merkel, leapt on the report.

But in an interview with Der Spiegel published Saturday, Merkel appeared reticent on his crisis management.

“The defence minister said he would present a comprehensive report this week about the project from its beginnings more than 10 years ago,” she said when asked about his future in the cabinet. “I do not wish to preempt that.”

De Maiziere had already run into trouble in February when he criticised German soldiers in Afghanistan who complained about a lack of public acknowledgement for their service, saying they appeared to be “addicted” to praise.

After a massive uproar, he said he regretted if his remarks had caused offence.