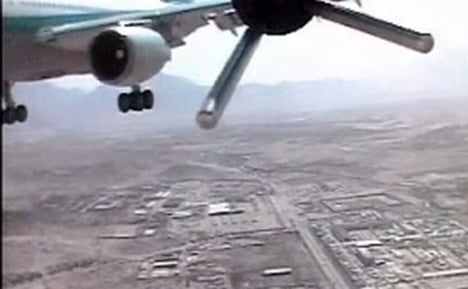 Weighing slightly under 40 kilos, German Luna drones have been used by the Bundeswehr in Afghanistan over the past ten years over sparsely populated areas. Yet in 2004, one nearly hit a passenger plane carrying 100 people.

Footage taken by the drone itself emerged on YouTube, despite being strictly classified. Der Spiegel magazine reckoned it showed the machine flying less then two metres away from the left wing of an Airbus A300 passenger plane which was carrying 100 people.

The Luna drone was then caught in the Afghan airline Ariana plane’s wake turbulence, before losing control and crashing to the ground over the country’s capital, Kabul.

Despite being nine years old, the footage is only now getting widespread attention – particularly because last week Defence Minister Thomas de Maizière decided not to fit Luna’s much larger successor, the Euro Hawk drone, with anti-collision technology. It was, he decided, too expensive.

Yet Germany will be sticking to its plan of buying up to 16 armed Euro Hawks for the army to use from 2016.

A defence ministry spokesman said that he did not foresee combat-ready drones being deployed over Germany, for example in anti-terrorism operations.