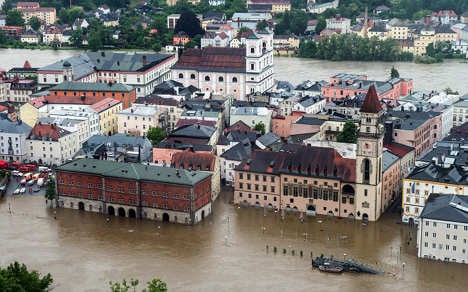 Merkel – facing general elections in less than four months – will go to an as yet unannounced region on Tuesday to get her “own impression of the situation, of the aid operations, also of the precautions for protecting people and their property,” Steffen Seibert told a regular government news conference.

An emergency task force is being set up with input from the interior, defence and finance ministries, he added.

Torrential rain across central Europe has hit many parts of eastern and southern Germany, especially the region of Bavaria, where large parts of the city of Passau in particular have been flooded.

The southern city which has a historic old town and is the point where the Danube is joined by the rivers Inn and Ilz saw the water rise above the levels of the disastrous 1954 floods, officials said.

Two people have died, two more are missing and thousands have been evacuated from their homes as widespread flooding ravages parts of Germany. Over 1,700 soldiers are helping those in particularly badly hit south and south-eastern areas.

Several cities and regions announced a state of emergency over the weekend in response to quickly rising waters. The states of Bavaria, Thuringia and Saxony were worst hit, with washed out roads and flooded towns.

Two people are missing in Baden-Württemberg, where the Neckar river burst its banks and reportedly swept them into the Echaz tributary.

A cyclist was one of the first victims of the flooding, which began last week. She was swept away by a river near Hannover. A 32-year-old man also drowned in a ditch after leaving a pub in Utting am Ammersee, Bavaria.

At least 1,760 soldiers are out helping in areas worse affected.

Click here for the a photo gallery of the floods.

Evacuation efforts were underway in Greiz and Zwickau, as the authorities in Chemnitz anxiously watched the river break its banks. The state premier of Saxony, Stanislaw Tillich, called off an official trip to Turkey to oversee the response to the disaster.

Chancellor Angela Merkel on Sunday said the affected areas could count on “full support” from the federal authorities in dealing with the floods.

A mountain lake lock burst in the Berchtesgaden region, causing the water to race into a sparsely populated valley below.

And Rosenheim’s Mangfall River could also rise to record levels, according to a city spokesman. Several districts there have already been evacuated.

In Saxony-Anhalt the situation was also critical along the Saale and Weiße Elster rivers. “Things are particularly dramatic near Wetterzeube,” said state premier Reiner Haseloff on Sunday. The Weiße Elster there could see the worst flooding since 1924.”

The high water has also halted shipping traffic on large sections of the Rhine, Main and Neckar rivers. Trains in southern and lower Bavaria are disrupted, including a main connection between Munich and Salzburg, Austria.