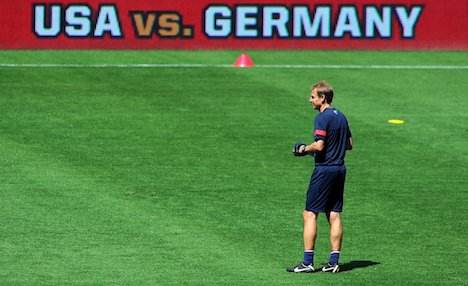 guided on home soil in the 2006 World Cup, now managed by his former assistant

Joachim Löw, in the US Soccer Federation’s centennial celebration match.

“We want to give them a good game,” Klinsmann said. “For me it’s a very nice thing to see my old staff. I built that staff and it’s still exactly the same.”

He will find it nicer if the Americans can deliver a victory, something they failed to accomplish in a 4-2 loss to Belgium at Cleveland on Wednesday.

“We will make sure we do a better job on Sunday,” Klinsmann said. “I would rather play Belgium 10 more times than El Salvador 100 times because that’s where you learn. We take the defeat and go get more into a flow and a rhythm.”

The US squad plays at Jamaica on June 7, hosts Panama four days later and entertains Honduras on June 18 in crucial North American qualifiers for the 2014 World Cup in Brazil.

“Obviously we regroup and look to a big game against Germany,” US midfielder Stuart Holden said. “The real results will matter when we come up in the qualifiers and hopefully those have a different outcome.”

The Americans have a greater urgency to find answers than Germany, which is wrapping up a US tour that began with a 4-2 triumph over Ecuador on Wednesday.

“We have two different missions,” Klinsmann said. “They just want to have an end of the season tour. We want to prepare sharply and precisely for Jamaica. This is our job. We want to go into Jamaica and get points and then also pick up wins at home.”

“Of course a few of our top players aren’t here, but our philosophy has always been that we need 30 players who can come in and play, not just 15 or 20, because of injuries,” Löw said.

“We need the competition for places. Because of that, the tour is very important for the players who are here and it’s a welcome chance to see them over a longer period of time.”

Arsenal striker Lukas Podolski netted two goals in the vicory over Ecuador and could spark the Germans, second in FIFA’s world rankings, to spoil the US Soccer 100th anniversary bash.

So too could Miroslav Klose, who netted five goals for Lazio in a recent Serie A match. Klose, 34, has 67 national-team goals, one shy of Gerd Müller’s all-time record.

“We want to test ourselves against the best in the world and we have no fear going into these games,” US defender DaMarcus Beasley said. “Obviously we want the result to go our way more times than not, but we learn from it.”