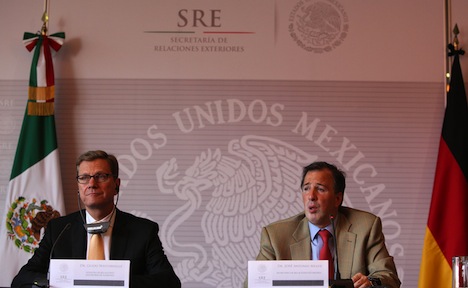 The treaty, the first regulating the conventional arms trade estimated at around $60 billion a year, will take effect after 50 countries ratify it, a process that could take up to two years. The United Nations General Assembly adopted the ATT in April.

Mexican Foreign Minister Jose Antonio Meade and his German counterpart Guido Westerwelle, meeting in Mexico City over the weekend for talks aimed at boosting ties, said they would ratify the treaty on behalf of their countries Monday.

“I would have liked a more aggressive scope” of the treaty, said Meade, but “increasing restrictions to prevent (arms) falling into the hands of those who should not have them is a good step.”

The treaty aims to force countries to set up national controls on arms exports. They would also have to assess whether a weapon could be used for genocide, war crimes or by violent extremists or organized crime gangs before it is sold.

Westerwelle was on his third official visit to Mexico as foreign minister. He said Germany’s “political strategy” sought “much closer” ties to the Latin American country.