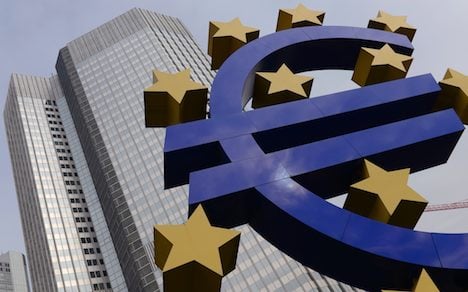 In 2008, when it was still a tender 10 years old, the ECB found itself at the heart of a crisis that threatened the very existence of the euro. And the Frankfurt-based institution has been fighting to stamp out the fires ever since.

Frequently referred to as the “guardian of the euro” during its early years, the use of that moniker has receded as the single currency found itself on the brink of disintegration.

Instead, Europe’s politicians have been all too eager to paint the ECB as either the scapegoat or saviour in Europe’s long and debilitating sovereign debt crisis.

Analysts said countless unforeseen challenges have forced the ECB to think on its feet since taking over monetary policy 15 years ago for the countries that share the euro, now numbering 17.

But they testify that the bank has largely done a good job for such a young and untested institution.

“There certainly have been enormous challenges, but they’ve managed to live up to them more than most of us would have expected,” said Ernst & Young Eurozone Forecast economist Marie Diron.

“Most observers would agree that monetary policy has been appropriate for much of this time. If there have been the odd mistakes, they’ve managed to correct them very quickly. But they’ve been learning on their feet,” the expert told AFP.

“The ECB has delivered an average inflation rate of 2.05 percent, which is very close to its mandate of maintaining price stability,” Schmieding said.

“In this respect, the ECB has done an excellent job, better than any other major central bank in the world and much better than the Bundesbank,” he said, referring to the once-mighty German central bank on which the ECB is largely modelled.

Unlike the US Federal Reserve, which can actively take measures to support economic growth, the ECB’s overriding mandate is to keep a lid on inflation. The ECB’s detractors like to compare it unfavourably to the Fed.

But Gilles Moec, head of European Economics research at Deutsche Bank, said such comparisons were unfair, given the different financial and institutional set-ups on either side of the Atlantic.

Overall, he was “fairly positive about the (ECB’s) handling of the crisis given the constraints it faces,” Moec said.

In a recent speech, ECB President Mario Draghi also seemed to suggest that the bank’s success in managing the crisis has been achieved by a process of learning by doing.

“We have responded by deploying measures that … have evolved as the crisis itself has morphed,” he said.

As part of its anti-crisis armoury, the ECB has pumped unprecedented amounts of liquidity into the financial system to avert a dangerous credit crunch.

And it launched a programme, known as Outright Monetary Transactions, or OMTs, to buy up the sovereign debt of countries that are finding it difficult to tap the financial markets.

But executive board member Yves Mersch said recently that the ECB’s “most important unconventional measure” was that it had been “advocates of change.”

“We have raised awareness of the need for profound transformations in our political economy and in our societies,” he said.

Looking ahead, Diron at Ernst & Young said the main challenges facing the ECB will be the task of banking supervision across the whole euro area. Finding a monetary policy which can cope adequately with the heterogeneity of the euro area would also be very difficult, she said.

During the years of Wim Duisenberg, who headed the ECB from its inception until 2003, and Jean-Claude Trichet, who ruled from 2003 until 2011, the central bank constantly stressed its one-size-fits-all view of monetary policy.

While that was necessary to engender a unified and strong cultural identity, it meant the imbalances created by having the same interest rate for a whole range of different economies were more easily overlooked, one ECB source told AFP.

But since those imbalances are at the heart of the current crisis, the ECB is now having to rethink its communication strategy.

“Communication wasn’t the ECB’s strong point. But that was in its nature, given the size of the governing council,” said Christian Bordes, professor in economic science in Paris.

“Under Trichet, there was a tendency to use code words, which was probably not a very good idea and backfired a bit. Communication under Draghi has probably been a bit better,” said Diron at Ernst & Young.