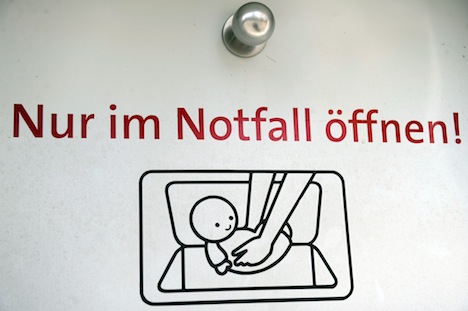 At a Berlin clinic, a discreet path winds through springtime flowerbeds to a sign that simply directs visitors to the “Baby Crib” — a steel hatch that opens onto a heated cot where an infant can be left.

“An alarm goes off for several seconds,” says Gabriele Stangl of the Protestant Church-run Waldfriede hospital in the capital’s leafy, residential Zehlendorf district.

“It takes two to three minutes for the nurses to come and get the baby, enough time so the mother can get away without being seen.”

In the 13 years since the clinic set up the hatch — known in Germany as the “Babyklappe” — the alarm has sounded more than 20 times, especially lately.

“For two years we didn’t have any, and during the last six months we had two in five days,” Stangl told news agency AFP.

The babies tend to be between 24 and 30 hours old and are cared for by the hospital. They are passed on to an adoptive family unless the birth mother changes her mind within the first eight weeks.

Germany has around 100 baby hatches under a system thought to have been common in medieval Europe and through to the end of the 19th Century. It was reintroduced 14 years ago in Germany and has since been adopted by other countries ranging from Belgium to Japan.

The chief aim of the baby hatches is to give the most desperate of mothers an alternative to killing their babies or abandoning them in places where they will die.

While the system is accepted by the churches in Germany, there is no legal framework governing their use, and the method remains controversial.

The United Nations condemned it last year for flouting a child’s right to know its origins.

Opponents also argue that the baby hatches have done nothing to bring down the number of newborns being killed every year in Germany.

According to the non-governmental organisation Terre des Hommes, which is campaigning against the baby hatch, 313 newborns were found dead in Germany between 1999 and the end of last year.

Just recently in Berlin the bodies of two babies were discovered — one abandoned in a plastic bag in a wooded area, the other in a public clothes recycling bin.

Terre des Hommes argues that women driven to killing their baby at birth generally suffer psychological conditions so severe that they are unlikely to try and find a baby hatch.

In the face of the UN condemnation as well as criticism from Germany’s ethics committee, Chancellor Angela Merkel’s government has adopted draft legislation to find another solution.

The idea is to allow women to give birth without publicly revealing their identity — something about 130 German hospitals already practise despite a law stipulating that midwives register the mother’s name.

The new bill, which must still be voted on by lawmakers, would provide a legal framework to guarantee birth confidentially.

However, the mother’s personal data would be kept for 16 years, after which the child would have the right to the information, which some psychologists see as crucial for their emotional wellbeing.

Conservative lawmaker Ingrid Fischbach said she believed the new legislation takes into account both “the mother’s desire for anonymity and the right of the child to know its origins”.

But supporters of the baby hatch see things differently.

“I don’t think a child has to fall into a psychological hole simply because it doesn’t know where it comes from. When it grows up in an adoptive family that tells it the truth and gives it lots of love, it can become a very stable human being, despite everything.”