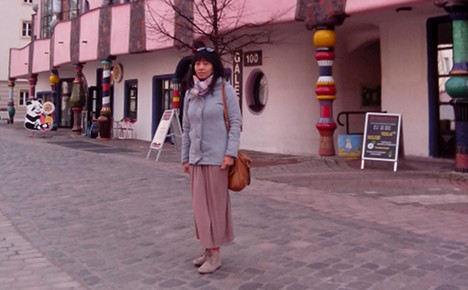 I was born in Indonesia and later settled in Singapore, where I lived and worked for 21 years. It was in Bali, however, that I met my German husband. We got married a year later and I moved with him to Magdeburg, where I found a job in an electronics distributor company, as a business development manager for Asia.

I love visiting Hasselbachplatz to just stroll around and visit the cafes. There are lots of different kinds of restaurants, any European cuisine you could want can be found there. It’s my favourite part of town to relax in during a long day of work and in the summer time, all the restaurants and cafes are open until late which means you can sit outside without freezing.

I think it is and in the six months I have lived here, nothing bad has happened to me personally, as a foreigner. Residents here are very tolerant and willing to help a new person out – they do not think twice if I ask for directions. This makes me think Magdeburg is a friendly city for foreigners, because locals will try to help until you find what you were looking for.

It’s absolutely important to pick up the language, because most people here don’t speak English. Particularly when it comes to dealing with the authorities, most of them can speak English but prefer to communicate in German. Even speaking just a little of the language, like me, helps

There are so many place in Magdeburg that visitors should see, but the Cathedral is one of the main must-see sights. It’s the oldest Gothic cathedral in the country and one of the tallest in eastern Germany, and home to the grave of Emperor Otto I the Great. The Green Citadel, designed by Hundertwasser, is also a good place to go, whether for a cup of tea or just to relax. The Kulturhistorisches Museum is nice to escape tourists, as it’s often empty and full of beautiful old sculptures. For an authentic experience I would recommend swinging by the old town hall, where there is a market selling everything a person could need, for great value for money.

Rotehorn, the city park, is unique and beautiful. There’s a lovely lake where you can rent a boat for a few euros and row around the lake amongst the birds. I personally really like to jog around here before picking up a coffee. Other than that, the city centre has all the shops you could need, especially for a bargain hunter like me.

Waterway junction is great – it’s where ships pass through the canal and is a real technical attraction! Last time I went was the summer time and I was so impressed at watching the ships pass through. It’s part of a network of canals that connect Hannover, Magdeburg and Berlin and has been considered something of an engineering masterpiece since it’s inauguration in 2003.

My husband is German and he’s a native of Magdeburg, which means we will be here for a while. However, we’re both hoping to retire within ten years or so and go back out to Asia. Maybe we’ll settle in Indonesia, Bali or even in Semarang, my hometown.