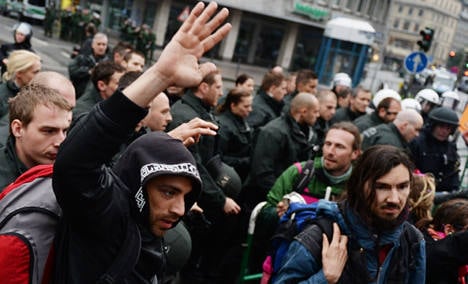 On the first of two days of protests organised by the anti-capitalist movement Blockupy, hundreds of people initially gathered in front of the ECB in the rain to protest the central bank’s handling of the euro crisis and Europe’s austerity policies.

They then moved to Deutsche Bank’s headquarters to protest against the involvement of Germany’s biggest lender in foodstuff speculation.

Following that, the protestors moved to Frankfurt’s main shopping mile and there were also plans to target the city’s airport later in the day to protest against Germany’s deportation policies.

But police there were said to be letting through only passengers with valid flight tickets, so it was not yet clear if or how many protestors would be able to get through.

Police declined to say how many officers have been deployed in the city centre, but an AFP reporter on the scene estimated that there several hundreds. Police put the number of participants at the eary-morning ECB demo at 1,200-1,500 while the organisers themselves claimed there were 3,000 protestors.

Barriers had been set up around the ECB’s Eurotower headquarters in Frankfurt’s city centre for days now to prevent demonstrators from getting too close.

A police spokesman said protestors had repeatedly tried to climb over the barriers, adding that pepper spray had been used to repel them.

An ECB spokeswoman told AFP that the bank had taken measures to ensure the security of its employees, in coordination with the police.

“The ECB will remain operational during demonstrations,” the central bank said in a statement.

On Saturday, which marks the ECB’s 15th birthday, a much bigger demonstration is planned in the city centre with organisers expecting as many as 20,000 participants.