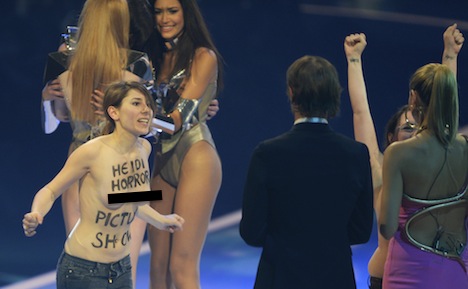 About halfway through the glitzy show in an arena in the southwestern city of Mannheim, two bare-chested women jumped on the stage to confront Klum.

Raising their arms and shouting at the German supermodel, the members of the controversial feminist group had “Heidi’s Horror Picture Show” scrawled in black letters on their chests. As the live show’s camera cut away, they were rushed off by security.

“I just saw breasts in front of me,” a somewhat perplexed Klum said.

“It had to be at just this moment,” she said sadly, referring to how the protestors had ruined the dramatic buildup to when one of four remaining candidates was turfed out of contention.

But the naked interlude didn’t derail the show for long, and in the end Lovelyn, a teenager from Hamburg was crowned Germany’s Next Top Model. The leggy beauty is the second black model to win the competition in the show’s eight seasons.

“I’ve worked so hard to get to this moment,” Lovelyn said after she beat out the 18-year-old redhead Maike from Cologne. “Heidi didn’t call me Baby Beyoncé for nothing.”

Klum has faced considerable criticism for her show, which some feel sends the wrong message to young girls.