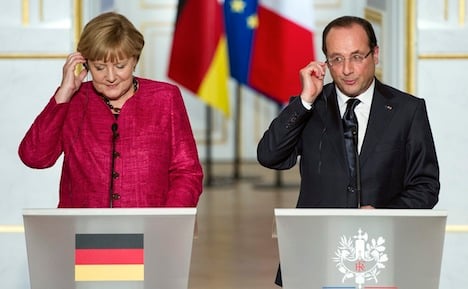 The sit-down between the heads of the eurozone’s two biggest economies came as fresh figures showed the number of registered jobseekers in France hitting a record 3.26 million after jumping by 39,800 in April.

The discussions, which came ahead of an EU summit at the end of June, were aimed at reviving a longstanding tradition of France and Germany presenting common positions at meetings of European leaders.

Socialist Hollande and conservative Merkel have failed to follow the tradition since the French president’s election last year, amid deep differences over how to tackle Europe’s recession.

They played down those differences at a joint press conference, with Hollande saying the two had agreed to jointly push for a new full-time chief to oversee economic policy in the eurozone.

“We agree that there be more eurozone summits with a full-time president of the Eurogroup,” the informal grouping of finance ministers that oversees the bloc’s economic policy, Hollande said.

“We need more coordination of economic policy… through better cooperation, notably within the Eurogroup,” Merkel added.

Their comments were short on other specifics, but both leaders vowed to push efforts to boost job creation, particularly among Europe’s especially hard-hit youth.

“We want (Europe) to pay more attention to jobs, notably youth jobs, to move more quickly to put in place a banking union, to have more efficient economic governance, to have more harmonius tax systems and to implement policies for growth and competitiveness,” Hollande said.

“I think we are showing once again that France and Germany are able, not to impose our views but… to bring all Europeans together on the paths that we consider best,” Hollande said.

Hollande has traditionally pushed more for growth measures and investment to tackle European economic woes, while Merkel has pressed an austerity-first policy that, while popular at home, has seen Germany come under increasing fire from crisis-hit countries in southern Europe.

Merkel has called a Berlin gathering on youth unemployment on July 3 with Hollande and labour ministers from all EU member states, where a detailed initiative is expected to be officially presented.

The difficulties faced by France’s recession-hit economy were highlighted meanwhile by the job figures for April, which marked France’s 24th consecutive month of rising unemployment.

Hollande blamed “a lack of competitiveness” and fewer opportunities for youth, but vowed to keep his longstanding pledge to turn the trend around by the end of the year.

Recognising France’s troubles, the European Union on Wednesday granted the country an extra two years to meet deficit-reduction targets but said Paris needs to step up the pace of reforms, including of its costly pension system.

Hollande hit back that the European Commission could not “dictate” orders to Paris, sparking criticism from a leading member of Merkel’s conservatives that underlined lingering Franco-German tensions.

Andreas Schockenhoff said it was the Commission’s “obligatory duty” to submit reform proposals because of France’s importance in Europe.

“Hollande’s criticism is, in this respect, inappropriate,” Schockenhoff, the CDU’s deputy chairman in the Bundestag lower house of parliament, said in a written statement.

“Hollande’s severe reaction shows the considerable desperation that, one year after coming to power, his government has still not found effective answers to the economic and fiscal problems of their country,” Schockenhoff said.