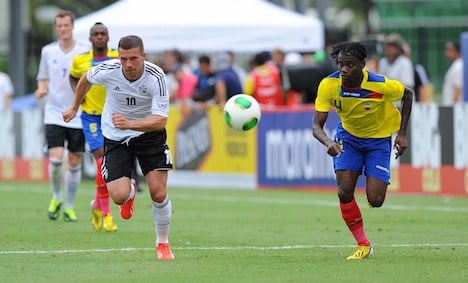 Podolski smashed the back of the net after a mere nine seconds late on Wednesday in an exhibition match in Florida.

After scooping the ball off a hapless Ecuadorian defender in the first moments play, the offensive player for Arsenal in London dribbled toward the keeper and fired past him.

The second-choice German squad went on to dominate the South Americans to win 4-2.

The lighting goal silenced earlier criticism from national team manager Oliver Bierhoff, who said Podolski’s performance for Germany had “stagnated” over the past year.

The 27-year-old footballer had brushed off the comments with some annoyance before the match.

“If Mr Bierhoff sees it that way, that is his opinion, I don’t really care. We don’t have to discuss everything,” said Podolski, who has made 108 appearances for Germany.

But he made no secret of his pleasure that his nine-second goal will go down in the record books.

“My son was in the stadium and he celebrated, too. Everything else that’s brought up comes second,” Podolski said.

Head coach Joachim Löw said he was impressed by Podolski’s efforts against Ecuador.

“He put in a class performance with two goals, he ran hard and showed plenty of fighting spirit,” said Löw.

Germany now face the USA in Washington DC on Sunday, with Löw saying he was using the two-match tour to assess his squad ahead of the 2014 World Cup in Brazil.