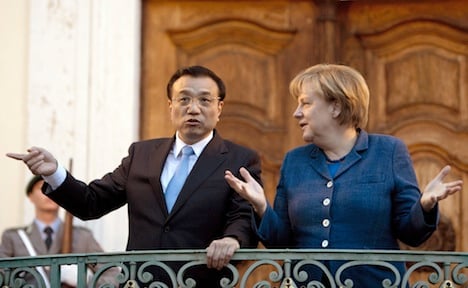 Germany will push in the next six months for discussions on resolving the disputes between Brussels and Beijing over Chinese telecom products and solar panels to avoid it ending in mutual tariffs, Merkel said.

Both she and Premier Li Keqiang, who is on his first foreign tour since taking office in March, told a joint press conference that they rejected trade protectionism which hurt both sides.

Under pressure from German industry, Merkel said Germany would do its utmost to resolve the issues by pushing for talks to avoid “lapsing into a kind of dispute which finally only ends in mutual tariffs”.

“I will, as head of the government, advocate that we, at the European level, as quickly as possible have intensive discussions with the Chinese side on the questions at issue,” Merkel added.

But as both the EU and China suffer the knock-on effects of a sharp economic slowdown, the slew of looming trade disputes – over telecoms, solar panels and steel tubes – has turned up the heat.

He said the move would not only threaten jobs in China and hit the branches concerned, but also affect the interests of European companies, consumers and industry.

“To this effect, this measure is a measure that doesn’t serve the particular interests and also damages others,” Li told reporters through an interpreter.

“Therefore we hope that through joint efforts and through dialogue and consultations, the trade disputes between China and the EU can be settled acceptably,” he added.

And he said that the EU decisions sent the “wrong signal” that trade protectionism had made a “comeback”.

Germany is the only stop among the EU’s 27 member states for Li on the trip, in a sign that Beijing wants to continue their special relationship, analysts say.

“From the German side, it’s all about trade. Germany sees China essentially as a large export market on which it’s increasingly dependent,” Germany expert Hans Kundnani, of the European Council on Foreign Relations, told news agency AFP.

But for China, Germany is not only economically important in providing much-needed technology but also plays a strategic part in helping to combat Beijing’s fear of the US and Europe teaming up against it, Kundnani said.

Li said his visit to Germany was also about visiting the EU. “We want through the intensification of cooperation with Germany, to also advance the relations and cooperation with the EU,” he said.