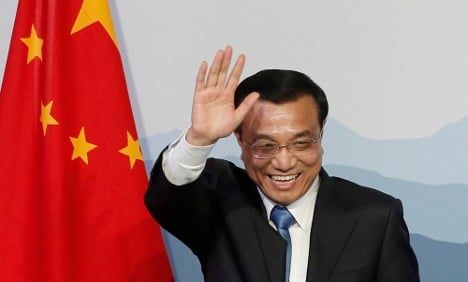 Germany is the only stop among the EU’s 27 member states for the new Chinese premier during his maiden foreign tour, in a sign that Beijing wants to continue their special relationship, analysts say.

Li’s two-day programme begins with a visit to the town of Potsdam, near Berlin, and the Cecilienhof palace where Soviet, US and British leaders met in 1945 to help shape post-war Europe and Asia.

Merkel, who on a trip to Beijing in August visited the Forbidden City accompanied by Li’s predecessor Wen Jiabao, later hosts Li for talks at the chancellery after a military honours greeting.

“From the German side, it’s all about trade. Germany sees China essentially as a large export market on which it’s increasingly dependent,” Germany expert Hans Kundnani, of the European Council on Foreign Relations, told AFP.

Merkel made two trips to Beijing within just seven months last year. She was accompanied on the second visit by top executives of blue chip companies including Airbus, which signed a $3.5-billion deal with China for 50 jets.

But for China, Germany is not only economically important in providing much-need technology but also plays a strategic part in helping to combat Beijing’s fear of the US and Europe teaming up against it, Kundnani said.

“The Chinese see Germany as a way to get the Europe they want, in other words a Europe that stays out of the strategic rivalry between China and the US as the US pivots to China, and essentially remains neutral,” the London-based expert added.

Berlin has emerged as the go-to capital from Europe’s three-year economic crisis. Trade between Germany and China reached around €144 billion euros in 2012, according to official German data.

The visit comes amid a series of tit-for-tat trade disputes between Beijing and Brussels, including the EU mulling slapping an anti-dumping levy on imports of Chinese solar panels.

Merkel indicated in Beijing she would not support a call by European solar panel makers for the European Commission to impose punitive tariffs against their Chinese rivals.

And Economy Minister Philipp Rösler criticised the threat this week, telling Welt am Sonntag newspaper that the German economy had “rightly, big

“I therefore expect the (EU) Commission to do everything to prevent a fundamental trade conflict,” he said.

In Thursday’s Die Zeit under the headline “Together on the outside lane” Li wrote that the two nations were economically working excellently together, adding: “The accomplishments so far are however just a start.”

“Active dialogue can contribute to better understanding and the endeavour to try to understand the other can deepen mutual trust,” he wrote, on dealing with differences.

Chinese dissident artist Ai Weiwei, who was detained for 81 days in 2011, hopes Merkel will push for better treatment in China of critical intellectuals in her talks with Li.

The meeting is officially to tackle economic and foreign policy issues but Merkel was thought to have raised human rights and press freedom in China at her last talks with Wen.

But Kundnani said that while currently an “almost perfect symbiosis”, the German-Chinese relationship looks set to change, with Beijing becoming stronger and Germany weakening as China moves up “the value chain”.

“Increasingly, the Chinese, over the next 10 years or so, are going to be providing not just a market for German exports but competition,” he said. Li, who also visited India and Pakistan, will arrive in Berlin from Switzerland with whom China is moving to sign a free-trade accord, under negotiation since 2011.