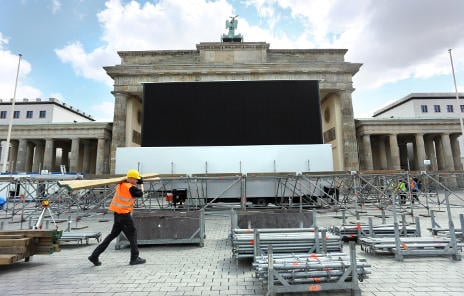 Hundreds of thousands of football fans are expected, for example, to gather at the fan mile at Berlin’s Brandenburg Gate to watch live screenings of the game, which only a tiny proportion of fans will be able to attend in person.

In light of suspected attack plans by Islamist terrorists, wrote the magazine, fans will have to contend with a larger police presence than otherwise. Bags will be checked to prevent explosives making their way into the crowd, said Der Spiegel.

“There are specific references to people, but not at the place and time,” politician Wolfgang Bosbach told news channel N-TV.

Munich’s Allianz Arena and Theresienwiese, where the city’s beer festival is traditionally held, are set to be full with 45,000 and 30,000 fans respectively.

Tickets for the Allianz Arena, which were originally given out by Bayern for free, are now fetching up to €90 on the black market.

All 20,000 places at Dortmund’s Westfalenhallen sold out in 24 hours, while the city centre fan zone has a capacity for 40,000.

There is particular concern in the German capital, which can host 500,000 spectators, with the Berlin fan mile just a few hundred yards from the Reichstag building, which houses the country’s parliament.

“We are prepared accordingly and know the security situation in Berlin,” police spokesman Michael Mars told Bild tabloid on Saturday.

How concrete a warning has been issued remains unclear, said Der Spiegel but added that Ziercke had spoken of a “serious indication.”

“Germany has long been a target for international terrorism. At this point there are no indications of planned attacks or targets in Germany,” he said.

Multiple similar warnings have been given in the past, the majority of which later turned out to be unfounded.