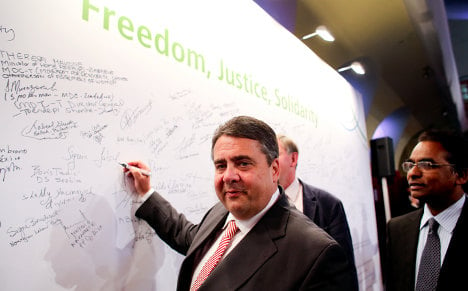 Launching the so-called Progressive Alliance in Leipzig with more than 70 other parties from around the world on Wednesday, Social Democratic Party (SPD) leader Sigmar Gabriel said the main aims would be to fight poverty and reduce the dominance of the markets over the lives of people.

“We use hundreds of billions to rescue the banks but allegedly we do not have enough money to provide clean water,” said Gabriel.

The launch was an answer to great dissatisfaction with the work of the Socialist International (SI) -the current global organization of 162 social democratic, socialist and labour parties. It is led by former Greek Prime Minister Georgios Papandreou, who was furious at the emergence of a challenger organization.

He accused Gabriel in an open letter to the SI members of making slanderous personal attacks and splitting the movement. “It is regrettable that the leadership of our German members is trying to split the global progressive movement – rather than seeking solidarity,” he wrote.

Yet the SI is seen by many as past its best days, while Gabriel said he was shocked at the continuing membership of some parties such as Hosni Mubarak’s Egyptian National Democratic Party, which was only thrown out of the organization in 2011 not long before Mubarak was overthrown.

Gabriel has also accused the SI leadership of corruption.

The Social Democrats will mark their 150th anniversary with French President Francois Hollande as the only foreign speaker and conservative Chancellor Angela Merkel in the audience.

The French Socialist president will give the keynote address at the anniversary celebrations of his centre-left allies, who are battling poor poll ratings as they try to unseat Merkel in September 22 elections.

Latest polls give Merkel’s conservatives a lead of 41 percent against 24 percent for the SPD, whose top candidate Peer Steinbrück has suffered through a series of campaign missteps.

Merkel – often voted Germany’s most popular politician and regarded as Europe’s most powerful leader amid the financial crisis – will not speak at the anniversary, considered a historical event which she attends as national leader.

Germany’s largely ceremonial President Joachim Gauck, a former Christian pastor and civil rights activist in what was the communist East Germany, will address the ceremony on behalf of the government.