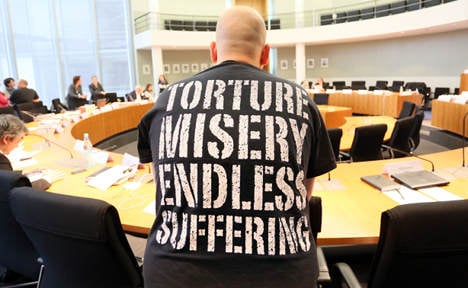 Written by the Saxony state intelligence service and dated April 28th, 2000, the letter states that “dividing labour in the pursuit of a joint aim make the group’s actions similar to that of a terrorist cell,” the investigative Report Mainz television programme cited the letter as saying this week.

The NSU’s aim was, it said, “to commit crimes against a liberal-democratic constitution.” And in September of the same year in Nuremberg, they shot the first of nine victims from immigrant backgrounds dead. The neo-Nazi extremists also carried out racially motivated bomb attacks and murdered one policewoman.

Reportedly just two copies of the intelligence service’s letter exist, and it was, Report Mainz said, seen only on a strictly need-to-know basis. In it, the then state interior minister for Saxony Klaus Hardraht is condemned for his inaction despite knowing the NSU was potentially very dangerous, and that they had been under observation from the state prosecutor’s office.

The document also goes into detail about the group’s apparent disappearance in 1998 – when the state gave up its observation efforts, claiming to have lost any trace of them – would never have been possible without assistance.

“Only through the closest connections in a closed group with a few tight-lipped people in the know, was a disappearance possible,” it said. The author then named Mandy S., the alias main suspect Beate Zschäpe went used after disappearing, as one of the helpers. Another man named was Jan W., now thought to have supplied the group with weapons, and Thomas S., suspected of giving them 1.4 kilos of explosives.

Speaking to Report Mainz, expert from the parliamentary inquiry working on the case – which has just gone to court in Munich – Hajo Funke said that the letter shows the murders could have been stopped, had appropriate action have been taken.

For him the letter is: “A clear analysis of the group, its circle of helpers and what they had planned” and showed that the intelligence service had at that time called for a more far-reaching investigation and that, if handled properly, could have avoided the murders of nine civilians and a police officer.

Representative of the Green party on the committee Wolfgang Wieland called the letter “an almost-prophetic analysis” that was “never handled properly.”

Apparently, both the Saxon and Thuringian state offices of criminal investigations knew about the NSU being under observation, as did the terrorism department of the federal government’s intelligence division. This means, essentially, that the right people knew about the potential threat but did nothing, said Report Mainz, which is produced by regional state broadcaster SWR.