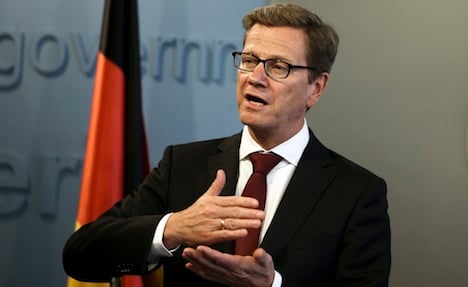 Foreign Minister Guido Westerwelle hailed the April 19 EU-brokered agreement to normalise ties between Serbia and its former southern province as “historic” but said momentum needed to be continued.

“Such historic circumstances do not occur every day, and when they occur they have to be grabbed,” Westerwelle told reporters after meeting top Serbian officials in Belgrade late on Monday.

He added: “If the concrete results (to implement the deal) are visible, I can give a positive message to our parliament” which should then give its nod to Serbia starting EU accession talks.

“It is important to make long-term brave decisions,” the German minister stressed after meeting Prime Minister Ivica Dacic, before leaving for talks in Kosovo.

Dacic stressed the “vital importance” of EU talks for Serbia, saying that further delay in opening the lengthy negotiations would have “disastrous consequences for our people and our country.”

The implementation of the accord was a key condition for Serbia to get a green light for the start of EU accession talks in late June.

Dacic is set to meet his Kosovo counterpart Hashim Thaci in Brussels on Tuesday to agree on implementing the accord.

“I want all sides to show a sufficient degree of flexibility, patience and wisdom. Talks tomorrow should be developed in this way, in order to show just before important meetings of the European Union that concrete steps are taken,” Westerwelle later said in Pristina, after meeting with Thaci.

Relations between Serbia and Kosovo have been strained since the 1998-99 war that ended after a NATO bombing campaign forced Belgrade’s troops out of Kosovo.

The ethnic Albanian majority in Kosovo unilaterally proclaimed independence in 2008 but Serbia has refused to recognise it, although more than 90 countries, including the United States and most EU member-states, have done so.