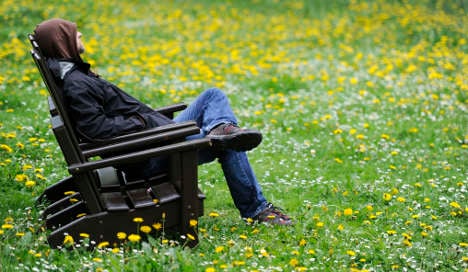 The Whit Monday holiday saw a low pressure front shifting towards northern Germany, which DWD said would bring colder sea air to most of the country – only the very north-east would be able to briefly hang on to the weekend’s warmer temperatures.

Meanwhile, areas west of the Rhine River continued to be pelted with heavy and constant rain, which DWD said was set to gradually ease off during the day.

The rest of the country sat under heavy cloud cover but mostly remained dry, with temperatures between 10 and 20 degrees Celsius. Storms were forecast for the Alpine region on Monday afternoon.

The rain in the west would continue overnight, said DWD, and by Tuesday would spread east and south to hit the rest of Germany, sometimes accompanied by the odd storm. Average temperatures would rise to between 14 and 19C.

A similarly wet picture was given for Wednesday morning, with showers and brief storms in the east and south. Things are set to brighten up in the west, however, with sunny spells in places on Wednesday afternoon. Meanwhile, higher regions and coastal areas will in places be battered by gail force winds.

Thursday, meanwhile, will see thick cloud spreading across the country, with showers hitting many areas throughout the course of the day, said DWD.