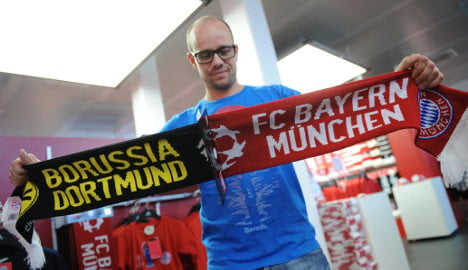 Since Bayern won in Barcelona in their semi-final on May 1, the day after Dortmund squeezed past Real Madrid on aggregate, the race has been on for ferry, plane or train tickets to London for fans eager to cheer on their team.

With two Bundesliga sides contesting the European Cup final for the first time, German fans are desperate to watch history made in London’s capital.

“In most cases, either lots of money or strong nerves are needed,” Dortmund’s fan officer Sebastian Walleit told the Ruhr Nachrichten when asked what ticketless supporters need to reach London.

Dortmund received just over half a million requests for the 24,000 tickets available in Wembley and the club reckon up to 5,000 ticketless fans will head to London regardless.

Travel demands by fans in both Dortmund and Munich have seen prices sky-rocket and a jumbo jet, chartered by Borussia Dortmund to fly to London for the final, sold out in just seven minutes on Monday morning.

“For any other city hosting the final, you wouldn’t necessarily depend on air travel,” explained Thomas Hess, CEO of Dortmund’s travel agency besttravel, with the English Channel a sizeable obstacle for fans wishing to drive. “We could have sold out 20 planes.”

German Wings and Ryanair plan to add six special flights from Dortmund to London on game day, with prices from Munich for most plane tickets now costing at least €2,000 for direct flights from the Bavarian capital to London’s airports.

Travelling supporters have been advised to shop around for plane tickets while hotel prices in London are also rising due to demand with most places asking for a minimum of a two-night stay.

Chances of picking up a ticket on the black market in London are next to zero as all tickets are personalised and the 9,000 available for the public to buy, of UEFA’s 27,000 allocated seats, sold out long ago.

For those fans unable to travel, there will be fan mile at Berlin’s iconic Brandenburg Gate with the match beamed onto five giant screens, while German Chancellor Angela Merkel has said she will be at the Wembley final.

But she was coy when asked which team she wants to see win the final. “I am the German Chancellor, so I say a German team, so that I am completely on the safe side,” she quipped.

While Bayern are bidding to win the treble of European, league and cup titles, Munich coach Jupp Heynckes has decided there will be no celebrations if they win at Wembley ahead of the German Cup final against VfB Stuttgart on June 1 in Berlin.

Should Bayern claim the Champions League title for the first time since 2001, there will be no celebration in Munich’s city centre, but the party will be put on ice until after the German Cup final at Berlin’s Olympic Stadium – providing Bayern win.