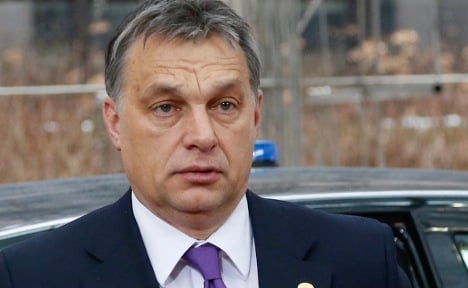 Orbán's recent parliamentary and constitutional reforms have raised concerns in Brussels that Hungary is sliding into a dictatorship and have prompted some to call for the country to be shut out of the EU.

Now, Orbán has hit back against Merkel's comment in a public discussion on Europe last week that Germany would “do everything to put Hungary onto the right path. But […] won't be sending in the cavalry straight away.”

Merkel's comments were in answer to remarks by the main opposition Social Democrat Chancellor candidate Peer Steinbrück, who in the same discussion raised the prospect of throwing Hungary out of the EU on the basis of recent undemocratic reforms.

“The Germans already sent the cavalry once, and in the form of tanks,” Orbàn told listeners to his weekly radio broadcast on Friday, “Our request would be that they did not send them again. It wasn't a good idea back then and it didn't work.”

Orbán's comparison of Merkel's treatment of Hungary with the Nazi military occupation of the country from March 1944 on-wards has raised eyebrows in Germany and worsened diplomatic tensions between the nations, wrote Der Spiegel magazine on Sunday.

The Hungarian opposition have also condemned Orbán's comment as a “coarse joke” and pointed out that Merkel has been calling for a moderate solution to the current spat between Hungary and the EU.

In March, Merkel voiced criticism of Hungary's constitutional changes, saying concerns raised by the European Union about the disputed alterations should be taken seriously.

A government spokesman said the chancellor had reacted "critically" to news

from Budapest that Hungary's parliament had altered the constitution for the fourth time since Orbán came to power.