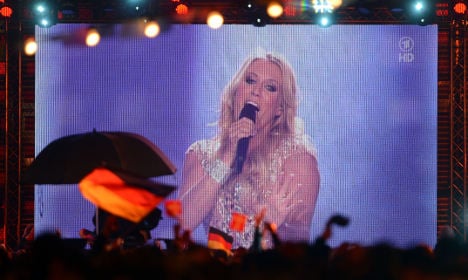 The German commentator for the show said the country’s weak showing might not be the fault of its entry Cascada.

“We are in a difficult situation,” said Thomas Schreiber from the ARD TV network. “There is surely a political situation.” He said he didn’t want to say that Germany’s poor showing was a slap in the face for Angela Merkel, but “you also have to see that it wasn’t just Cascada, but Germany on stage.”

Emmelie de Forest, at 20 the youngest contestant, won as expected with the song “Only Teardrops.” Azerbaidjan, the 2011 winner, was second followed by the Ukraine. Some 125 million people watched the show, organisers said.

Cascada’s lead singer Natalie Horler said she was “super disappointed” with her placement, but the lead up to the competition was “the most awesome week of my life, of my career.” She said it was hard to know how the vote would come in.

Since Denmark won, next year’s competition will likely take place in Copenhagen, with the final set for May 17, 2014.