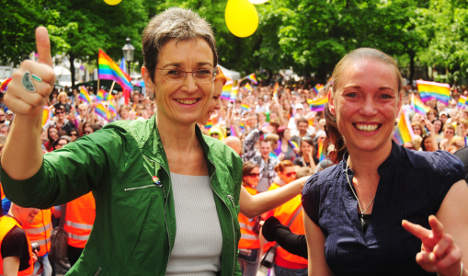 Lesbians are more affected than gay men, the study showed. The report was released on the day the French government announced it was making gay marriage and adoptions by same sex couples legal.

“I’ve only been discriminated against a few times,” a young lesbian told the study’s authors. But that’s because no one knows that she’s a lesbian, the authors wrote, as the 21-year-old has not told her friends and family.

The European Agency for Fundamental Rights conducted the study via online input from 93,000 people in the EU’s 27 member countries as well as Croatia. The agency said it was the largest survey of its kind.

The Netherlands and Denmark posted the lowest rates of LGBT discrimination, but still around 30 percent of those surveyed reported being discriminated against. The worst rates are in central and eastern Europe. Lithuania and Croatia posted the highest rates of 60 percent.

Of those responding from Germany, some 46 percent said they’d experienced discrimination in the last year. That puts Germany in the middle of the EU survey for LGBT discrimination.