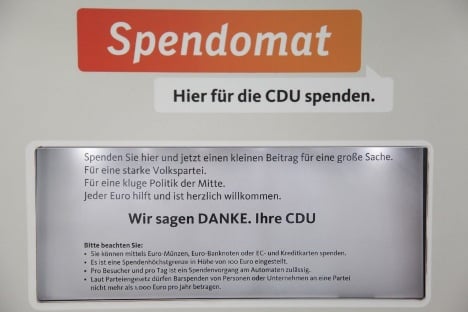 The conservative CDU has had its fair share of shady party finance scandals, which is why its new orange ATM comes with a few strict rules. An individual may not give more than €1,000 a year, and people not paying cash may only make one payment per day.

It takes both cash and card, and prints out a receipt of donation that, Süddeutsche Zeitung said on Friday, have become popular souvenirs among tourists visiting the headquarters in the two weeks since it was put in.

“Every euro helps, and is very welcome,” is written across the machine, which was built by a company specialising in parking meters. Donation is, it says, important “for a strong party” and “for intelligent centrist politics.”

CDU staff came up with the idea to install the ATM after seeing something similar in at a tourist attraction used to collect money for the Berlin royal palace being re-built in the city centre.