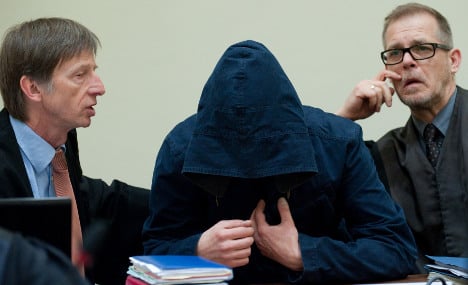 Although Beate Zschäpe, 38, on trial in connection with nine racially motivated murders and that of a German policewoman, has not made any comment to the Munich court hearing the case, it seems two of her four alleged accomplices may testify.

She is said to have been, along with Uwe Mundlos and Uwe Böhnhardt, part of the nucleus of the killer cell. The other two died in a murder-suicide in November 2011 after being surrounded by police in the wake of a botched bank robbery. It was only then that the cell was uncovered.

When the court resumes its work on June 4th, the judges plan to start cross-examining the four alleged supporters and helpers of the neo-Nazi terror gang the National Socialist Underground.

Two men identified only as Holger G. and Carsten S. – accused of various crimes such as supplying the murder weapon, identity papers and rental vehicles to the killers – are in witness protection programmes and are expected to turn state’s evidence.

“We expect that the accused will very openly put their cards on the table,” said Reinhard Schön, a lawyer for victims of a nail bomb attack the NSU is also accused of.

“We are very eager to hear their testimony.”

The other two, Ralf Wohlleben and Andre E., are not expected to speak.

The Munich office of lawyers representing relatives of those killed by the gang were smeared with faeces and urine this week, while last week paint was thrown at a building in which antifascist campaigners live. The office of the Bavarian refugee council was also attacked and a window smashed, the Süddeutsche Zeitung reported.

Meanwhile a parliamentary investigative committee reported this week on the shambolic performance of the police and various levels of security services over the seven years during which the NSU seemed to murder, set off bombs and rob banks with impunity.

– When in 1998 the NSU trio went into hiding after police found the garage where they had been building bombs, they left a list of addresses which included two of the four people now on trial with Zschäpe. Ten entries were in Chemnitz, where the trio spent the following two years. This list was never given to the relevant security service, but is thought to have been sent to the state criminal police.

– There were so many paid neo-Nazi informants in the circles surrounding the NSU trio that the authorities must have been able to deduce that they had formed an armed gang. One even told military intelligence he thought they were acting as terrorists. Yet none of this information was passed to police by security officials who wanted to protect their sources.

– The right questions were asked – as early as 2004 – with a paper within the Office for the Protection of the Constitution discussing the danger of armed right-wing extremists in Germany. The paper even specifically named Mundlos, Böhnhardt and Zschäpe, but concluded there was no evidence that they were active. By this time the gang had killed five people and let off two bombs. The neo-Nazi magazine Der Weisse Wolf carried a note saying thanks to the NSU.

– In 2006, after the ninth NSU murder, a Bavarian police profiler produced an analysis suggesting the murderers were right-wing extremists. But other investigators dismissed his work and a paper from the Baden-Württemberg police insisted the victims had been involved with a south-eastern European crime gang whose head had ordered the killings to save face.

– The NSU investigative committee repeatedly heard from police and intelligence officers who said they could not remember details they were being asked for. In Nuremberg and Munich, the committee heard, intelligence agencies paid people to set up kebab shops and deliberately not pay for deliveries in order to flush out the “kebab killer commandos”.

– The Hamburg police even had to admit having hired a medium who promised to contact one of the murder victims – free of charge.

– After a bomb was set off in Cologne and a video was found showing two men pushing the bomb to the attack site on a bike, the fact that two men on bikes were often seen at the murder sites was ignored. A woman who was near the murder spot in Nuremberg said there were similarities between the men on bikes she saw and those on the video, but was ignored.

– In the wake of the 2001 al Qaida attacks on the USA, with many of those involved having studied in Hamburg, security service priority was put on Islamist terrorism – and the danger from neo-Nazis was side-lined, even though they had radicalized during the late 1990s.

– Several officers told the investigative committee they had not recognized the attacks as fascist because there were no claims of responsibility. It seemed to have been accepted wisdom that neo-Nazis would always send letters claiming any attacks for themselves, even though this was not the case.

The conduct of the security services “was not becoming of a state with the rule of law, and this must not happen again,” said the head of the committee, Sebastian Edathy.

He said the multiple intelligence failures were “without historic precedent”.