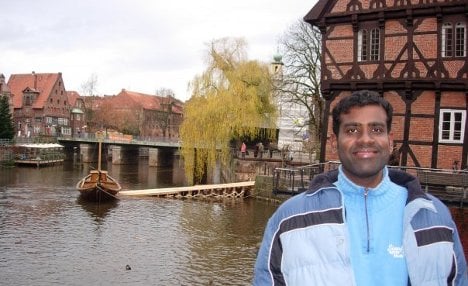 I came for my higher studies in Germany. I completed Master of Science from Technical University Hamburg-Harburg (TUHH) and Master of Business Administration from Northern Institute of Technology, Hamburg. I’m now working as software engineer at Werum Software Systems in Lüneburg.

Lüneburg is a small and cosy city. One can do cycling around the city. City known for its historic buildings from medieval ages. It has a beautiful lake (Kreidebergersee) which is a must place to hang around when the sun shines. The Salz Museum gives historic perspective about Lüneburg. Sande is the centre point of the city which one never should miss out if you are in Lüneburg.

Yes, of course. Otherwise, I wouldn’t have imagined to life here for more than five years here.

I always say to my friends, if one wants to enjoy living in Germany, one has to speak decent amount of German. I made lot of German friends only after speaking German. With time, one gets the flow of language.

The Sande, Kreideburgersee, and Salz Museum are all must-sees.

Lüneburg has lots of great restaurants. I never miss eating out with the diversity of restaurants Lüneburg offers.

There is a shipyard which connects two canals from different heights. It shows the marvel of German engineering and science. Not many people know about it. But most of the local knows about it.

Well I have got my German citizenship. That answers everything!