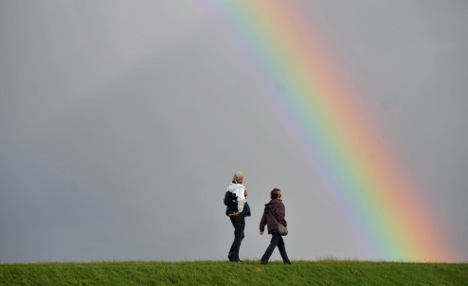 Those air masses will make it difficult for residents in western Germany to get a head start on summer – and cooler temperatures and rain showers might encourage some to spend the weekend indoors, national weather service the DWD said.

But the forecast for the other half of the country is much warmer and brighter, at least for a while: with warm, dry winds bringing more sun in the east until Friday, when the rain clouds that have cast a shadow over areas farther west are set to roll in.

The western half of Germany, however, will remain in springtime-showers mode. “You could enjoy an ice cream and 26C temperatures in Potsdam – or walk through Mülheim an der Ruhr with an umbrella in 17C weather,” DWD’s Marcus Beyer said.

Over the weekend, the stark temperature differences are expected to ease. Yet temperatures could still reach up to 27C in the east, with highs of 21C forecast in the west. Come Whit Monday, known as Pfingsten in Germany, meteorologists said areas around the country will cool down slightly.