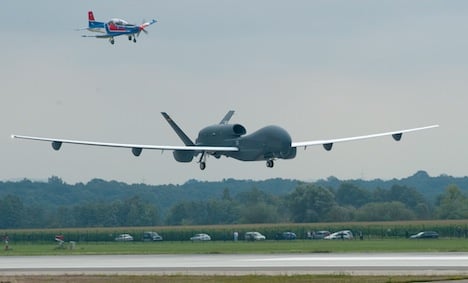 Germany had “no hope” of seeing the unmanned aircraft, part of a programme that would have cost more than €1 billion ($1.3 billion), approved for use, said the source speaking on condition of anonymity.

The European Aviation Safety Agency has said it would only certify the drones to fly over unpopulated areas because of a lack of an anti-collision system to protect airliners, according to German press reports.

“The equipment is not ready for approval without immense expenditure,” the source added.

Germany has already spent €508 million on a Euro Hawk prototype and was due to fork out a further €500 million on four more models.

The Euro Hawk is a version of the American Global Hawk produced by Northrop Grumman and re-modelled by the European defence and aerospace company EADS.

Berlin has also already spent €40 million on modernising the northern Jagel air base where the reconnaissance drones would have been based.

In 2011, one year later than planned, the prototype Euro Hawk arrived at the Manching base near Munich in southern Germany.

Germany is in talks with Israel on buying Heron TP drones but German Defence Minister Thomas de Maiziere has indicated that any purchase would not take place ahead of September 22 elections, according to news weekly Der Spiegel.