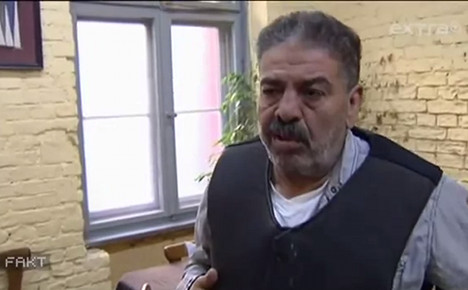 Hassan Allouche’s stocky frame might carry a cape with considerable dignity, but sadly he has no superhero outfit – instead, the moustachioed middle-aged man holds court daily in a café drinking tea and smoking.

He helps his clients, largely from the city’s immigrant community, to calm down and understand each other – and abide by German law. Allouche claims a 99-percent success rate in solving disputes, a figure supported by the obvious respect he commands in those around him.

“I explain to people that they have to respect German rules,” he said, sitting down straight after a session reconciling two families caught in an ongoing row.

The group of men who had pulled up chairs beside him in the café nodded. All admitted unashamedly that they had called on him for help in the past. “He is our grandfather,” said one.

“People call on me because the police come too late,” he said. By the time the authorities do arrive, Allouche has often calmed a situation down, leaving the police to tackle any legal fall-out.

This means that the Berlin cops tend to accept Allouche, he said. “I have a good relationship with the police in general but some are against me, as they think I operate outside the law,” he said.

‘I have stopped massacres’

Mediation is in Allouche’s blood. He is the current bearer of the Friedenstifter – Peacemaker – title that his father and grandfather held before him. His brother was also involved in settling arguments, and was killed as a result.

Allouche has been at it nearly every day for 30 years, called by largely immigrant families to settle disputes over such diverse subjects as money, children and work – as well as sometimes trickier things like marriages.

The arguments are often on the brink of tumbling out of control and into violence, which is when he acts to defuse the situation. Sometimes he is not called until things are already out of hand.

Once time he arrived at a flat and knives were not only out, but being wielded, he said. Nonetheless he managed to stop anything too serious happening. “I have stopped massacres,” he said.

On the day we met, his assignation had been less dramatic. A bad look exchanged between members of two families had escalated and violence was in the air – something he had managed to avoid, sending the families away as friends.

His normal approach is to talk with each rowing party separately to hear both sides of the argument before bringing them together.

While “always trying to help” is Allouche’s life-calling, there are some areas in which he refuses to tread. “When I am asked to help with problems that have arisen from terrorism, weapon deals, or money laundering, I refuse.”

There have been, of course, incidents in which Allouche hasn’t been able to help. Particularly memorable was the murder of a 30-year-old woman by her mentally-ill husband in June 2012.

“She spoke to the police twice before she was murdered but they couldn’t do anything,” he said. “I wouldn’t have left her alone.”

‘Nothing to do with religion’

He has sometimes had young couples whose parents object to their relationships stay at his house while he talks with the parents.

When this is mentioned it provokes a broad grin from a man in his thirties sitting nearby. He said he and his now wife were taken in by Allouche after his parents threw him out. The “Peacemaker” let them stay until he’d smoothed relations between the young lovers’ families. “And now we’ve got five kids,” said the man.

Although many of Allouche’s mediation clients are from Muslim communities, he said what he did was not rooted in religion.

“My work is nothing to do with religion. Religion, skin colour, none of it matters,” he said. And although he said he was only very rarely approached for help by Germans, he has leant his services to Albanians, Italians, Poles, and Russians.

The father-of-five’s work extends into community outreach, giving lessons to the city’s young men in how to behave with honour and without strife – he works with up to 30 youngsters a week talking about how to function in Germany.

Allouche, who would only admit to being between 50 and 70, was born in Lebanon to a Palestinian family and has been here for decades.

His brother moved over to Berlin too and followed the family “Peacemaker” business until he was shot in the back of the head in 2000 during an argument in Neukölln. “He got in the middle of a problem that couldn’t be solved,” said Allouche.

“I never get scared, though,” he added, joking that fear was not a word in his vocabulary. If, like his brother, he were to be killed he “would die for Germany, the country where I live and where I work to bring peace.”