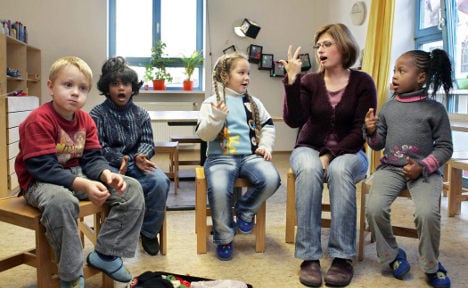 New government figures show a growing number of pupils whose first language is not German are needing extra tuition so that they can follow school lessons, wrote the Bild daily tabloid.

In families where little or no German is spoken in the home, the children often have a hard time keeping up with native speakers in the schoolroom, and more of them are needing crash language courses to get them up to speed, figures suggest.

In Hamburg, for example, official statistics show that 23 percent of primary school children hardly ever speak German at home, while in North Rhine-Westphalia 18 percent of kids speak another language with their family, whereas in Bavaria this figure lies at 15 percent.

“In some regions, nearly half of all children need targeted language tuition,” Maria Böhmer, the German government’s Commissioner for Integration told Bild. “It’s a big task. It has to be given top priority everywhere.”

Every child must be able to speak German well enough to follow lessons when they start school, said Böhmer, which is why language support was important from the very beginning.

Those who can’t speak German, she said, are just “passive onlookers in our country.”